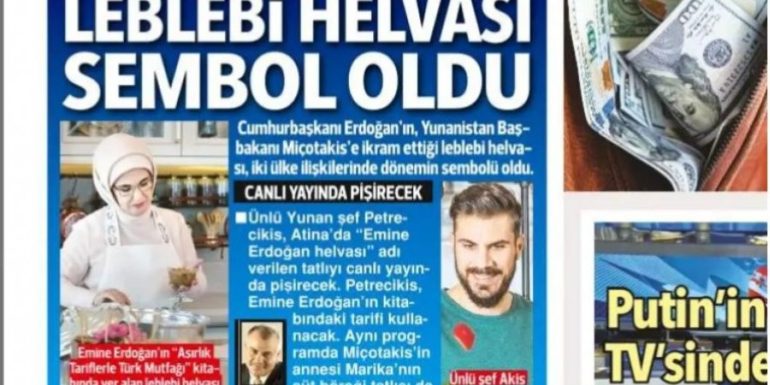 The "halva diplomacy" continues, after the Mitsotaki-Erdogan lunch in Istanbul last Sunday.

The beginning was made with the publication of the recipe of halva with straws by the Turkish newspaper Hurriyet and the comments made on the morning show of SKAI.

On the occasion of this post, Aris Portosalte took the opportunity to place an order with the well-known chef, Akis Petretzikis.

"Aris, you have greetings from Akis Petretzikis", said the presenter of the show Maria Anastassopoulou, receiving an sms from the chef during the discussion.

A little later, Maria Anastassopoulou received a new message from the well-known chef, who not only accepted the challenge to make the halva of the first lady of Turkey, but went a step further by saying that he would also make the milk pudding by Marika Mitsotaki to compare the two sweets.

In fact, after the challenge accepted by the famous chef from Maria Anastassopoulou and Dimitris Oikonomou to make the two sweets to compare them, there was an "intervention" by the Turkish Presidency to get the right halva. This is because the recipe published yesterday by the Turkish newspaper lacked some important material.

Today, the Turkish newspaper Hurriyet circulates on its front page with the subject and writes "halva is a symbol". The article has a photo of Emine Erdogan and Akis Petretzikis.

The newspaper's article also mentions the statement of Dora Bakoyannis yesterday on SKAI, that when Emine Erdogan sent her her cookbook, she respectively sent her the book "Recipes with history" of her mother, Marika Mitsotaki.