Mitsotakis: It is outrageous that Turkey blames Greece 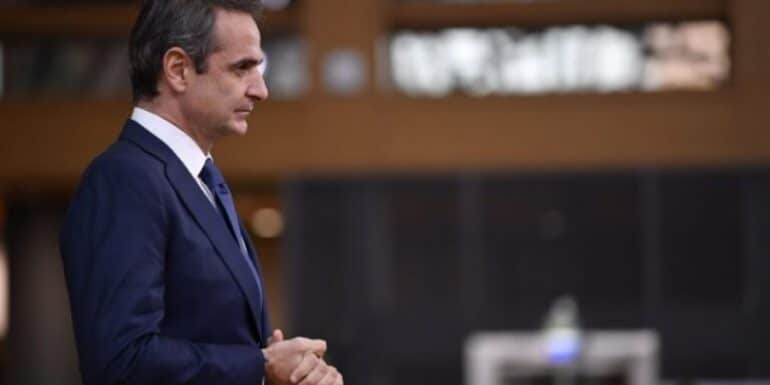 The relations between Kyriakos Mitsotakis and Recep Tayyip Erdogan are at an absolute nadir, as was evident from the fact that the two leaders did not exchange words during the reception hosted by US President Joe Biden in honor of the leaders participating in the 77th High Level Week of the UN General Assembly.

According to information from the Greek government, Kyriakos Mitsotakis had a cordial conversation with the American president, who recalled details of the Prime Minister's recent visit to the White House. He also had a conversation with the president of the European Council, Charles Michel. At the center of the discussion was the energy crisis, as the two leaders share the same concerns. They also referred to Mr Michel's recent visit to Saudi Arabia on 13 September.

Kyriakos Mitsotakis gave an example of how he intends to respond to Erdogan's reports against Greece yesterday in an interview with Bloomberg, during which he called it outrageous that Greece is being accused of crimes against humanity.

"To accuse Greece of crimes against humanity in the immigration issue is simply outrageous. It is outrageous because it is Turkey that, very openly and very publicly, has been using immigrants for the last two years, trying to encourage them, to send them to the Greek border, trying to push them to Europe", noted Kyriakos Mitsotakis.

Greece, he added, defends its borders as it has an obligation to do, respecting fundamental rights.

"In general we have seen a crescendo of Turkish rhetoric against Greece which is obviously unacceptable. I think this is something that has been pointed out to Turkey by the leadership of the European Union, but also by the US. We don't need another source of geopolitical instability in the Eastern Mediterranean when we are waging war against Russia and trying to support Ukraine," he stressed.

Asked about the reasons why Erdogan has been acting in this way lately, Mr. Mitsotakis estimated that it is a policy of internal consumption and added: "It is our destiny from geography to live together. And as I've told him many times, we should be able to agree that even when we disagree, we should do so in a civilized way."

"Questioning the sovereignty of a NATO ally is clearly unacceptable. It is not going to be tolerated by Greece, and it basically shows Turkey as a country that is no longer part of what we usually call the Western alliance," noted the Greek Prime Minister.

President Erdogan, he said, "refuses, at this time, to meet with me. I have said openly that I am always open to discussion and believe that it is in the interest of regional stability to significantly tone down the rhetoric. He's not helping anyone, I think, not even himself, if he continues down this path."