Mitsotakis for Enhanced Supervision: A 12-year cycle that brought pain is coming to an end 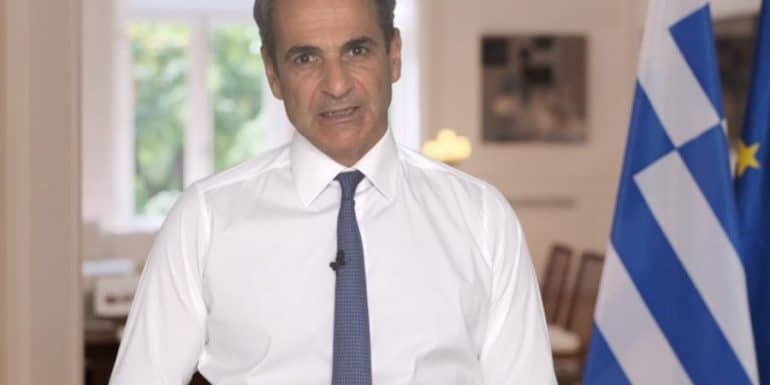 Kyriakos Mitsotakis issued a message on the exit of the Greek economy from the regime of Enhanced European Supervision on Saturday morning.

August 20, 2022 is a historic day for Greece and Greeks: in the most official way, our country exits the Enhanced European Surveillance regime. Thus closes a twelve-year cycle that brought pain to the citizens, stagnation in the economy and division in society. But for a new, clear horizon of development, unity and prosperity to emerge for all.

Today's development marks the end of the Memoranda and all that was imposed in their name: unsustainable taxes and cuts in wages and pensions. Bank audits and mortgaging of public property. Degradation of national Defense, public Education and Health. But also marginalization of Greece's position in Europe and in the world. All this is, fortunately, in the past.

Also in the past belong the wounds that opened in the trunk of our society, these 12 years: fanaticism, fires, violence, but also tragic deaths, like those of Marfin. Blind questioning of institutions. Squares above and below, where lies grew beside the poison of the Golden Dawn. To be followed, then, by four years of demagoguery that cost 100 billion and pushed the country to the brink. It took hard battles against populism to keep the country on a European trajectory.

Only those who do not forget find the strength to move forward. That is why we must learn from recent experience. From the timeless and cross-party responsibilities that led to the Memoranda with wastes beyond our endurance. Of the policies that exacerbated their consequences. But also from the manipulations that prevented the fastest exit from the supervision of our international partners.

Greece today is another Greece. It shows high growth and a big drop in unemployment, already down 3 points from last year and 5 from 2019. While, at the same time, its citizens have now been freed or eased from many taxes imposed in the Stone Age. All pay less contributions and almost all lower ENFIA. The minimum wage was increased by 63 euros. And the weakest are targeted.

I will repeat that the reintegration of the country was neither easy to understand nor easy. All the more so as it was achieved amid a succession of challenges: from migrant incursions on the Ebro and the permanent aggression of neighbors to the global pandemic and the "explosion" in energy and inflation from the war in Ukraine. Permanent fronts, for which the State has already allocated 50 billion.

And yet, in an uncertain world, our country marches with the certainty of consistency and result. Strengthening our Armed Forces with modern means and our Diplomacy with dynamic initiatives. Putting public Education and Health on new tracks. Increasing the collective income from the outperformance of the economy. Turning Greece into a vast construction site with hundreds of large and small projects. And digitizing the state to such an extent that we forget what our life was like before gov.gr.

Exemption from Enhanced Supervision means greater national discretion in our economic choices. But not a return to the mistakes that brought about the painful memory adventure. After all, what I mentioned above is due, precisely, to a prudent policy that exhausts the fiscal space, but without depleting it. With measured measures, which increase the total wealth in favor of the whole society.

We move forward without forgetting. Because we now know that lower taxes lead to growth and investment in new jobs. We know that Europe does not only have the appearance of control, but also of solidarity which strengthens the country's position. And that, ultimately, economic independence goes hand in hand with national independence, just as the progress of the state can be translated into support and benefit for every Greek household.

The last three years thus, in practice, respond to the lessons of the last 12 years. It shows the way to never, ever, go back to what we lived. It forges our self-awareness. And he calls us to march together with weapons of truth and realistic solutions and not lies and easy denials. In a course that may hide mistakes, but which will certainly not be a wrong course!

In the difficult years that preceded, our people suffered a lot. But it also proved a lot. Thanks to his own sacrifices, the country quickly got back on its feet. Sufferings became lessons of mature responsibility in our political attitudes. And when needed, Greek men and women trusted and allied themselves with the State and the responsible forces, in the face of common threats. I thank them from the bottom of my heart.

Tomorrow can and must be fairer, with more opportunities for everyone. In order not to experience the brain drain of young people again, for women to live and work with safety and equality, for disabled people and every weak person to feel the care of the state, in a country of guaranteed rights and well-paid work, open Education and decent Health. We can do it.

Today the government, even before the end of its first four-year term, is writing the end credits to a multi-year test. So let's turn them into a prologue to a new exciting journey. With the recovery of the Investment Grade as the first step and the National Recovery Plan as a constant compass that will build a strong, modern and self-reliant Greece. With stability, continuity and consistency.