Greece is sending a letter to the UN Secretary General, in which it completely deconstructs the unilateral and non-existent objections of Turkey to the Aegean islands. 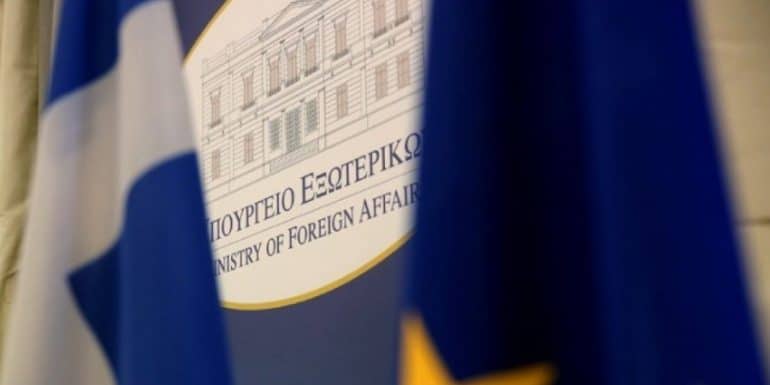 According to diplomatic sources, the letter will be delivered to the UN Secretary General within the next few hours.

The letter of Athens comes in response to the letter of the Turkish Permanent Representative Feridun Sinirlioglu of September 30, 2021.

The new Turkish claims of "conditional sovereignty" - where the condition for their concession was, always in Ankara, their demilitarization - exercised by Greece in the Aegean islands as well as in the Dodecanese, are "a new development" and " "they are seriously undermining regional peace and stability," Athens said in a letter to the United Nations on May 25, responding to a letter from Turkish Permanent Representative Feridun Sinirlioglu on September 30, 2021.

The Greek government emphasizes in its letter to UN Secretary-General Antonio Guterres that Turkish claims that "Greek sovereignty over the [Eastern Aegean] islands depends on their demilitarization" under the Lausanne (1923) and Paris Treaties (1947) are "legally, historically and factually unsupported". It is noted in this connection that Ankara insists that as sovereignty is called into question, the rights deriving from its exercise are also questioned - in this case the rights of islands in maritime zones.

Athens cites two legal cases before the International Court of Justice in The Hague (ICJ) to clarify that borders and territorial sovereignty formed by international treaties cannot be challenged. The two cases are a) that between Cambodia and Thailand for the Preah Vihear temple (Case Concerning the Temple of Preah Vihear, Cambodia v. Thailand, Judgment of 15 June 1962) and b) that between Libya and Chad (Territorial Dispute, Libyan Arab Jamahiriya / Chad, Judgment of 3 February 1994).

"Therefore", clarifies Athens, "any attempt to challenge the sovereignty of Greece in these islands on the unfounded condition that Greece allegedly violates its obligation to demilitarize them under the aforementioned treaties (ss. Lausanne and Paris in the fundamental principle of international law concerning the stability of borders and titles of sovereignty, as confirmed by international case law '. Following this position, Athens emphasizes that all islands have full rights in all maritime zones without the slightest legal dispute.

The Greek side, of course, rejects all Turkish arguments for selective demilitarization imposed by the 1936 Montreux Treaty, according to which Ankara believes that Lemnos and Samothrace should remain deprivation, as well as the Turkish side's subsequent attempt to show that the statement of the then Minister of Foreign Affairs Aras before the Turkish National Assembly (July 31, 1936) that Greece has no obligation to keep Lemnos and Samothrace demilitarized has no legal force.

Also of interest is the Greek response to the attempt to identify the provisions of the 1947 Treaty of Paris on the demilitarization of the Dodecanese with the status of the λανland Islands, invoked by Mr. Sinirlioglou in his letter last September. The invocation of the 1856 Convention for the Demilitarization of the λανland Islands, annexed to the 1856 Paris Peace Treaty, is "completely irrelevant and inapplicable" in the case of the Dodecanese because the 1947 Treaty does not concern a "legal status" on demilitarization ". In addition, Athens reiterates that Turkey is "res inter alios acta" in relation to the 1947 Treaty, Article 89 of which states that "its provisions do not confer any rights and benefits on states that are not Parties".

The fact that Turkey "calls on other States Parties in these circumstances to urge Greece to comply with their forecasts" confirms "Turkey's persistent practice of raising issues that have no legal basis, a practice that adds to the instability that the country she provokes with her actions ". Athens also reminds of the continuous upgrade and strengthening of the Turkish military forces, the threat of war, but also the issue of recent overflights, emphasizing the relevant provision of Article 13 of the Lausanne Treaty that they must be avoided. Finally, it calls on Ankara to put an end to these movements that contribute to regional instability and to come to an honest solution to the "outstanding dispute" over the demarcation of the continental shelf and the Exclusive Economic Zone (EEZ) on the basis of good neighborliness and neighborliness.