A fashion designer from Avgorou at Athens Exclusive Designers Week 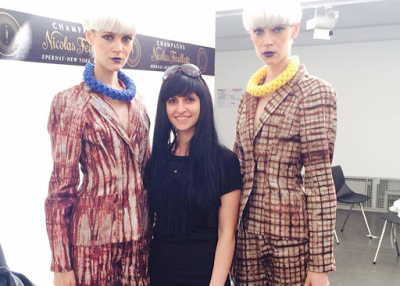 A few days are left for the 21st Athens Fashion Week, Athens Xclusive Designers Week, which will take place from March 31 to April 3 at the Zappeion Megaron. Like every season, this year the program will include fashion shows of important fashion designers, fashion brands and up-and-coming design talents. One of them is the young fashion designer Augusta Theodoulou from Avgorou. This year, AXDW has the pleasure and honor of hosting the international fashion house DSQUARED2 and the brand's designers and founders themselves, Dean and Dan Caten, in a unique special appearance, where they will present some pieces of F / W 17- 18 of their collections, through their innovative “GLUNGE” look, as a result of the combination of glamor with grunge. The third day of the event is dedicated to the young designers, who participate in the institutionalized competition New Designers Awards whose sponsor is renamed Amstel Radler, the famous beer of the Athenian Brewery, with lemon juice and only 2 & alcohol. The young designers will present their F / W 2017-18 collections and will compete in the New Designers Awards by Amstel Radler, taking their first steps in the fashion industry and claiming important awards for their future careers.

For this season, on the occasion of Amstel Radler, AXDW has decided to award a 4th Audience Award, the "Fashion Refreshment Award", which aims to reward team effort and highlight the ways in which it can ultimately make difference in the field of artistic creation. A new fashion designer and an experienced fashion blogger become a team, in order to create a unique lemon-inspired creation. The lemon-inspired looks have already been posted on the specially designed online platform, for public voting! http://whenlifegivesyoulemons.gr/ The winning couple, designer / mentor-blogger will be announced on Sunday, April 2 at the New Designers Awards by Amstel Radler.

The curtain of the 21st AXDW will fall with Starwalk for a Cause, a special, charitable fashion show event. The most important Greek models of the 80's and 90's will participate in StarWalk for a Cause by Bioten and will walk on the catwalk, such as Vicky Koulianou, Niki Kartsona, Rea Toutountzi, George Heimonetos, Alexandros Parthenis and others. All participants will wear the unique creations of renowned Greek fashion designers, such as MI-RO, Ioanna Kourbela, Sotiris Georgiou, Vassilis Zoulias, Makis Tselios, Evi Grintela, Victoria Kyriakides, Vlassi Holeva, Parthenis, Celia Dragouni etc. All proceeds from the public participation will be donated to MDA Hellas, the Association of People with Neuromuscular Diseases.

In addition, during the four days, AXDW visitors will have the opportunity to enjoy the current S / S 2017 collections of Greek fashion and jewelry makers participating in Xclusive Elements. The creators of this year's Xclusive Elements are (alphabetically): ET Collection Creations by Elsa Toli, Eugene, Imisi, KNK Collection by Athina, Lifelikes, Proestilo and Tsili's by Tsili Katerina. Among the designers who will compete in the "Fashion Refreshment Award" is Augusta Theodoulou. The young designer from Avgorou who lives permanently in Paris will collaborate with Fashion Blogger Nancy Spathi (Nansoumou) in order to create a unique lemon-inspired creation.

You can vote for Augusta Theodoulou by clicking here Who is Augusta Theodoulou?


Augusta Theodoulou was born in Cyprus. She studied Computer Science, worked as a teacher and in 2013 decided to pursue her dream, studying FashionDesignandTechnology in Paris, at the IFAParis School. In 2016, she won the Bronze Award at the China International Fashion Design Competition, standing out among more than 2.000 young designers. Her creations have been featured in exhibitions in Paris, Washington and China. It transforms the fabrics it uses, by composing various handmade techniques (macrame, crochet, etc.). For Augusta, clothing is an art form and a means of expression. At this time, she is preparing to launch her eponymous label in Paris.

The young designer from Avgorou in an interview last fall on ANT1iwo and Christiana Dionysiou states:

"I was born and raised in Avgorou. I graduated from high school with honors and studied basic (BSc) and postgraduate (MSc) Computer Science at the University of Ioannina, Greece. Although I could not experiment with activities beyond my studies when I was at the University, there were several periods which I can recall earlier where I was looking for different ways of expressing myself, such as writing poems and making crafts using traditional techniques such as crochet.

Especially for the crochet hook, I remember starting it as a toy when I was about 8 years old. It is worth making a small reference to the first "teacher" I had in handicrafts. She was an elderly lady who lived for a few years in my neighborhood, the very nice grandmother-Friday, who taught me art.

Craftsmanship, we all know is in the Cypriot tradition and so many women knew at least the basics in various techniques, but Grandma-Friday I think she really had the talent and willingness to experiment with art while having patience and a way to pass on her knowledge to others. . I really enjoyed the process and I can say that I preferred to spend time with her even if I left other games my age.

At one point during my postgraduate studies and while I was also working as a computer science professor, I started knitting again where it really was like I had never left it. Basically, what I tried from the first moment was to render the traditional art in a more modern way by making different kinds of accessories.

It was very nice that from the beginning many friends encouraged me to promote my work and so I started to have my creations in a small shop with handmade accessories in Ioannina. From that point on, I began to experiment more and more by devoting personal time to various types of techniques (macrame, also using beads or metal).

In Ioannina, with the help of the "Art Workshop" workshop, I organized a 3-month seminar for the creation of modern crochet accessories. And because one brings the other, at some point I even bought my first sewing machine to make the first pieces of clothing for myself.

The pleasure and satisfaction I got from being creative has always been great. But I considered this activity as a hobby or secondary activity. My husband found a job in Paris and asked me to move there. My job as a teacher was something that filled me a lot. The energy I receive from the students, the satisfaction of my offer and my participation in their daily progress is something irreplaceable.

Because I didn't know French, I knew that going to France would mean that I couldn't practice the teaching I loved so much. On the other hand, I could work for a computer company, but leaving the "living" room for students and locking myself in a company room was certainly not the answer.

With positive thinking, I thought that all this was just an "invitation" from the fancy fashion scene and in fact it came from the historic metropolis of fashion, Paris. So I took the opportunity to follow the passion for creation and did my research to find a fashion school in Paris with English lessons. And that's kind of how I ended up at the IFA Paris Academy and the Bacheloron Fashion Designand Technology, which is designed for students from all over the world.

Basically, because I didn't want any other opinions to affect me, I applied and did an online interview without telling my family. When they answered in the affirmative, I announced to everyone that from the age of 30, I would return to the desks. This may be another important lesson I had to teach my students. Education does not have an expiration date, nor does it concern a specific period of life. Basically, it should never stop. 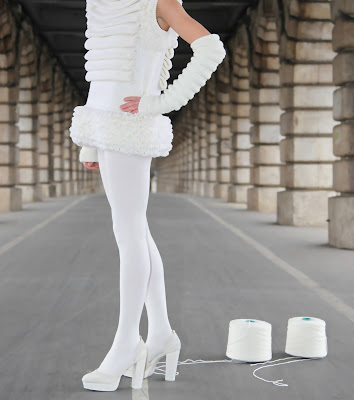 It was very important that…

I had teachers who believed in me and my ideas from the beginning and who encouraged me from the first moment. The biggest challenge was not the lessons but the fact that I had to become a student again as a teacher.

In my first year of study as a fashion designer in Paris, I was very stressed trying to discover and prove - first of all to myself - that I have potential.

The name of my collection was "Daedalia" and I was inspired by the myth of Daedalus and Icarus. Man creates machines that make everything faster. And the faster he goes with them, the more needs he creates in an endless loop.

He thinks he is getting closer to happiness and freedom, but he may find himself isolated and locked in the complex cell he is building. Daedalus built the complex Labyrinth, but ended up imprisoned in it with his son Icarus.

The feathers he invented and built, then became their hope to escape. After they managed to leave, the young Icarus, dazzled by his sense of freedom to fly, had ignored his father's advice and we all know the end he had. Simply put, the central message of my collection is that intelligence and knowledge are necessary to progress as human beings, but on their own, without marrying them wisely and moderately, they not only do not guarantee what is expected but can still bring and disastrous results.

It's true that my collection has already traveled many miles…

First of all, I had the opportunity in June to present my work at the fashion show organized every year by IFA Paris in France and the best collections of graduates participate. In October, they traveled to the corresponding event at the IFA Shanghai in China, where in addition to the graduates there, some of the best works from Paris are selected.

At the same time, in September I took part in a demonstration organized in Washington, DC, by the French Embassy there to promote French fashion.

I was selected to present my collection in two competitions in Asia and China, selected by the top 30 among about 3000 candidates from around the world. The first is the "China International Fashion Designers Creation Contest 2016" (October 2016) which took place near Shanghai and where I distinguished myself. I took third place ("Bronze Award") while the second is the "Humen Cup - International Youth Design Contest 2016 (Women's clothing)" which takes place near Hong Kong at the end of November ".