Fotis Fotiou: Tragic and borderline situation with the location and identification of missing persons 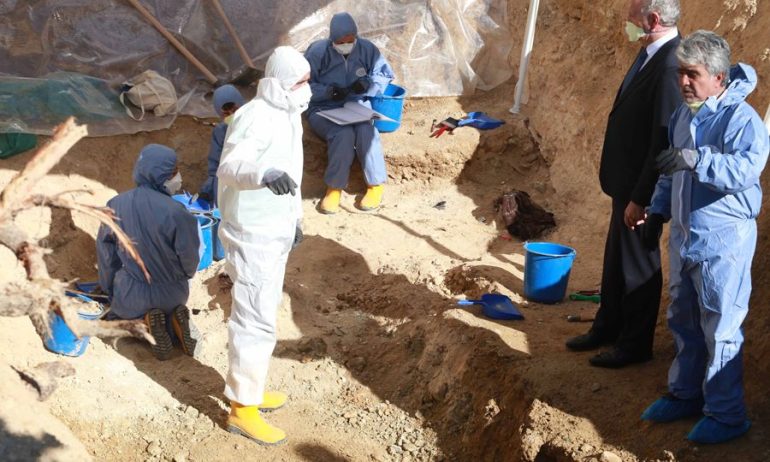 2,5 thousand remains of the bones of the missing are in dusty boxes in the anthropological laboratory of the CMP, stressed the chairman of the Parliamentary Committee on Refugees, under whose microscope the current developments around the issue of the missing were put.

Nikos Kettiros said that these remains have not been identified due to costs, saying that the state does not give 500 euros for each bone while the total amount is estimated at around 1,5 million euros to identify people who have left bones in areas of Cyprus. He added that today the refugee committee has committed the executive power to finance this bone and to identify the 2,5 thousand bones. He pointed out that the relatives of the missing are given a tooth or three bones from one palm to do the funerals. He also stressed that bone movements are a war crime.

Regarding the compensations to the relatives of the missing, which amount to around 70 million euros, Mr. Kettiros said that 8 years have passed and the government has yet to submit relevant legislation before the Parliament for a vote. He added that the committee was told that the relevant legislation is currently in the Ministry of Finance, while he noted that the Refugee Committee will send a letter in order to put pressure so that, as he said, some people sitting in offices take their responsibilities.

DISY through George Karoulas states that they suggested the presentation of a proposal to the refugee committee by the Commissioner of the Presidency and the CMP to begin the process of identifying the 2,5 bones stored in the CMP laboratory. As he said, it is the obligation of the CMP to disburse the necessary amount for the identification of the bones.

DIKO through Christos Senekis notes that the progress observed in identifying the bones of missing persons is disappointing. As he said, it is an insult that there are 2,5 thousand bones in the CMP laboratory and that the identification process does not proceed, due to the non-allocation of funds amounting to 1,5 million euros. He also stated that it is an insult for the state not to proceed with the study for the location of missing Assios who were transferred from Ornidi to the garbage dump of Dikomos due to non-allocation of funds amounting to 80 thousand euros.

Fotiou: The situation is tragic

The Commissioner of the Presidency described the situation with tracing and identification of missing persons as tragic and borderline. Fotis Fotiou said that hundreds of cases of missing persons remain unclear. He added that most of the bones sought were moved to other locations. As he said, it is not only the case of Assia, but there are bone movements in Round, Short, Lapithos, Agastina and Agios Hilarion. He also said that the majority of the missing are in the large mass graves and mainly around Kyrenia. He also said that to date it has not been possible to identify 50 to 60 caskets with sprayed bones. According to him, the pieces were sent to laboratories abroad, saying that the results sent to Spain are not expected to be encouraging. He also said that the effort of the Greek Cypriot side continues at the political and diplomatic level.

For her part, the representative of the Greek Cypriot side in the CMP, Leonidas Pantelidis, stated that the bones of another 900 missing and fallen people are being searched. He estimated that the bones of another 100-120 missing from small bone fragments, which are in the anthropological laboratory, can be identified. As he said, in mass graves, in addition to the large bones, about 2,5 thousand small pieces were found, which need to be identified.

Mr. Pantelidis also said that new technologies are used to locate graves, such as ultrasound machines and drones with cameras that detect differences in the ground and anything that the human eye can not see.
At the same time, he stated that in the coming weeks, the Portuguese expert is expected to arrive in Cyprus, who will carry out a study for the garbage dump in Dikomo, where it is believed that the bones of about 70 Assians were moved. As he said, there was a problem with his employment as the amount he was asking for was high, while the Portuguese was expected in Cyprus last August.

It is worth noting that according to the data, in 2021 37 identifications were made, of which 29 concern missing persons and 8 victims of the invasion.