Agios Georgios: Easter Monday the celebration - Why it is mobile

Who was Saint George and how did he testify? 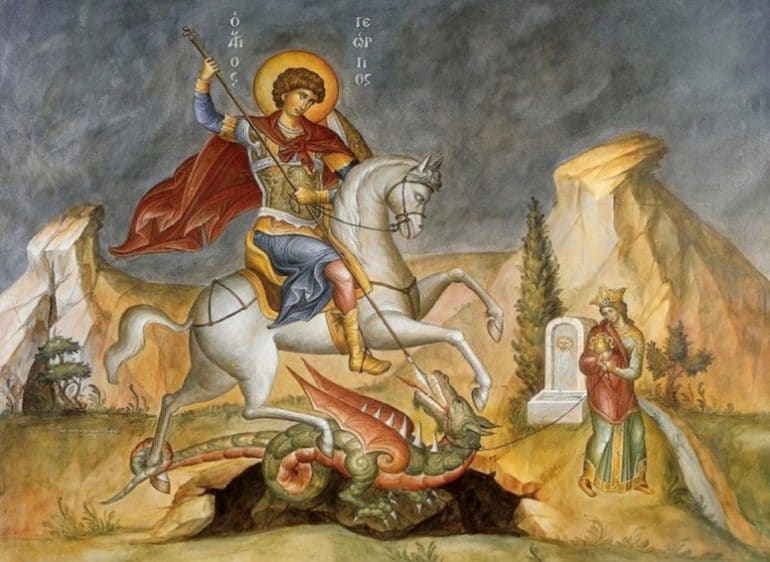 Saint George belongs to the choirs of the great martyrs and is one of the most popular saints of our Church.
Easter Monday today and the Church honors the memory of St. George.

This is a mobile holiday and there is a reason for it.

The Saint normally celebrates on the 23rd of April. However, if the day falls before Easter, the holiday is postponed to Easter Monday.

This is because his ecclesiastical tropes contain resurrection words, which cannot be sung before the Resurrection.

Who was Saint George?

Saint George (280 - 23 April 303) was a Roman soldier. He came from Cappadocia and served as an army officer under Emperor Diocletian.

He was sentenced to death for not renouncing his Christian faith. He was later canonized as a Christian martyr.

Called by the Orthodox Church a Great Martyr and Trophy Bearer, he is one of the most popular saints in the entire Christian world.

He is considered a Saint of the Orthodox, Catholic, Anglican, Lutheran and Armenian Churches.

He became the patron and Trophy-bearing saint of the Greek Army, after the liberation of the Greek Nation. Thus, in the image of the dragon they saw the Turkish conqueror, who was killed by the Saint.

This depiction appears in hagiography from the 12th century onwards.

In 303 AD, when the persecutions of Diocletian began, George did not hesitate to confess his Christian faith, provoking the death of Diocletian, because he held a high office and was his beloved.

He gave him wealth, land and slaves to convert him to, and when George refused, pardoning the pagans, he subjected him to a series of horrific tortures.

He was first tied to a stick and beaten on the abdomen with a stick. The Christian tradition describes that after he was speared, his flesh was torn with a special knife.

He was then thrown into a pit of boiling lime and then forced to walk in hot metal shoes. From all these trials, God miraculously kept him alive.

George was finally martyred by beheading, on Friday, April 23, 303 AD. According to the calculation of the Christian historian and apologist St. Eusebius, this day corresponded to the Friday of the Renewal of Easter.

Constantine the Great built a temple on his tomb. From there the Crusaders transported them to the West.

The faith of George seems to be the reason for the baptism of Christians the military Anatolios and Protoleon, Victor and Akindynos, Zotikos and Zenonas, Christoforos and Sevirianos, Theonas, Caesarios and Antonios, whose memory is celebrated by the Church of Apollo and wife of Diocletian, together with the slaves of Apollo, Isaac and Kodratos, whose memory is commemorated on April 20, and Saint Nike.

After the martyrdom of Georgios, his associates Eusebios, Neon, Leontios, Logginos and four others also testified. Their memory is honored by the Church on April 23.