Who were the three Hierarchs who celebrate today and why do we honor them?

Today, January 30, the Church celebrates the three Hierarchs, the patrons of the Letters. 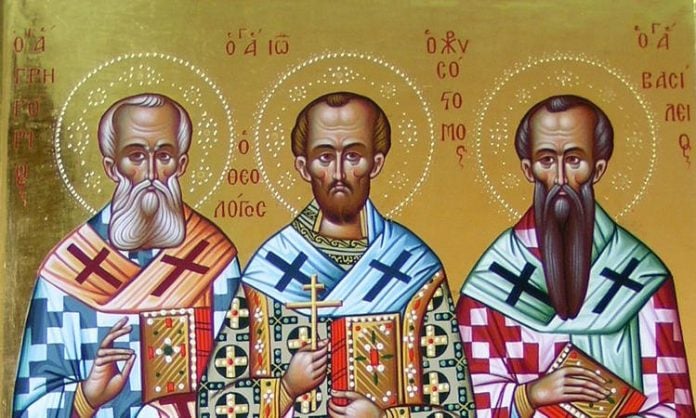 By the term "Three Hierarchs", we refer briefly to the three eminent Saints and theologians, Kingdom of the Great, John Chrysostom and Gregory the Nazianzen.

For their wisdom and their Christian life, the Orthodox Church called them saints and they celebrate each one individually. But because of a disagreement among Christians over which of the three offered the most, it was decided and established by the end of the 4th century that there should be a common celebration for all three on January 30 of each year.

Saint Basil, or King of Caesarea, was a bishop of Caesarea and is considered the Father of the Church and one of the greatest theologians of the Orthodox Church. His contribution to Christian theology is considered fundamental while he is also credited with the "divine liturgy of the Great Kingdom". Basil the Great studied in Athens and considered the study of classical writers and Greek philosophy very important, of course from a Christian perspective. His contribution to the development of letters and charity made him one of the greatest figures of the Christian tradition.

It is believed that his language "dripped honey" as he was the most charismatic orator of his time. He served as Patriarch of Constantinople and dedicated his life to the development of charity. In fact, the daily meals he organized fed 7.000 people!

In the field of philosophy, he may have rejected the theories of the ancient Greeks about God, but he did not hesitate to use the instrumental methods of their philosophy in order to develop a systematic theology.

In his life he was a model ascetic while he did not fail to condemn those priests who were rich in their capacity. Such was the harsh criticism of the Emperors that the court eventually persecuted and exiled him. But his fame surpassed him since he is considered a Saint by almost all Christian denominations.

Also known by the nickname "theologian", Gregory was the Patriarch of Constantinople in the 4th century. His influence on Trinitarian theology is considered so significant that he became known as the "Trinitarian Theologian". Most of his works influence modern theologians, especially with regard to the three Persons of the Holy Trinity. He was a friend of the Great Kingdom as well as of the brother of Saint Gregory of Nyssa.

He was a strong follower of letters and wanted to bridge the gap between Greek-speaking and Latin-speaking theologians of his time. Apart from being an excellent theologian, however, he was also a very good poet, having written several poems on theological and moral issues.