The Election Centers will mostly operate in Temples, Temple halls and in some cases in Schools or Community Councils. 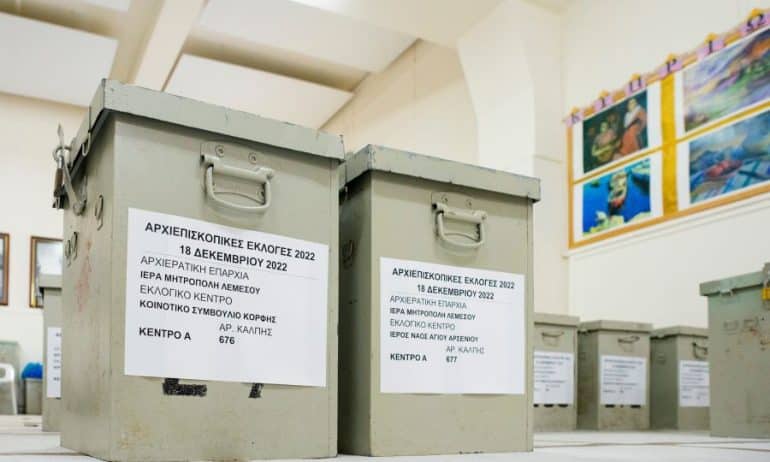 The election process for the selection of the new Primate of the Church of Cyprus is underway today, after the widowhood of the Archbishop's Throne, on November 7, when the Archbishop of Cyprus Chrysostomos fell asleep after a long battle with cancer.

Relevant Articles
The polls show Athanasios – The Synod votes for Paphos Georgios
They mingled mitres and petrachels to ascend the throne
The election process, according to the Charter of the Church of Cyprus, is carried out in two stages: In the first stage is the formation of the triumvirate, with universal voting and in the second stage is the election of the Archbishop by the Holy Synod. Today, Sunday, those who are registered in the Electoral Roll, are invited to exercise their right to vote and vote for the 6 candidates for the Archbishop's Throne.

Voting will start at 10am and end at 18pm, with a midday break between 00pm-13pm. If necessary, an extension of 00 hour will be given. Already the President of the Republic, Nikos Anastasiadis has announced that on the 14th he will exercise his right to vote for the Archbishop Elections, at the Church of Agios Nektarios, Center A', in Limassol. The candidate Hierarchs will also exercise their right to vote.

The Election Centers will mostly operate in Temples, Temple halls and in some cases in Schools or Community Councils.

There will be 942 polling stations in all of Cyprus and they are distributed as follows: Holy Archdiocese of Cyprus 199, Paphos 136, Kitiou 121, Kyrenia 7, Limassol 253, Morphou 45, Constantia and Famagusta 50, Kykkou and Tilleria 4, Tamasou and Orini 74 and Trimythoundos and Lefkaron 53.

Any interested voter can find out in which Election Center they are voting, if they are registered, through the website of the Church of Cyprus https://churchofcyprus.org.cy at the link entitled "Learn how to vote".

In order for voters to be able to vote, they must have with them their political identity card or, for their further convenience, their voter book which contains the identity number through which the voter will be identified.

After the end of voting and the completion of local counting in the polling stations, the Vote Counting Sheet is filled in and sealed, while one of the Assistants sends the results by fax to the General Superintendent of Archdiocesan Elections.

The Presiding Officer, who remains at the Election Center with the ballot box, takes a photo of the Vote Counting Gender with his mobile phone and sends it electronically to the email address that has been given to them.

The delivery of the ballot box to the provincial administrations is done only by the President.

The Vote Count Sheet includes the votes of the candidates numerically and in writing, while the results, aggregated, for 942 centers, will be issued by the Office of the General Treasurer, in the Archdiocese.

After the end of the electoral process, the next three days are protest days. After the expiration of the three days, the General Superintendent of Archdiocesan Elections will collect all these objections, if any, and will have to deliver them to the Overseer and the Holy Synod.

According to the Charter of the Church of Cyprus after the 3 days have passed, within 5 days the Holy Synod must meet to study the objections, ratify the result and establish the triumvirate.

Subsequently, within 3 days, the Holy Synod will choose the Archbishop from the three persons that have already been established.

Besides, a large number of members of the Police will help today for the smooth conduct of the Archdiocesan Elections, inside and outside the local election centers.

In his recent statements to the KYPE and when asked about it, the Police spokesperson, Christos Andreou, said that the Police will undertake policing and the observance of law and order in all electoral districts from the start of voting until the end of counting of votes.

In addition, said Mr. Andreou, he will take security measures in all possible event venues or places where the presence of the Police may be needed, in cooperation with the General Registrar of Archdiocesan Elections, and by having the corresponding number of Police members for the specific event business.

He noted that a Crisis Management Center will be established, which will operate from 9 am until the end of the operation, led by the Assistant Chief of Operations, assisted by the Commander of the MMAD.

Asked how the Police will assist in the conduct of the elections, Mr. Andreou said that a large number of Police members will cover with motorized patrols all the cities, suburbs and villages of each province, inside and outside the local polling stations in consultation with the electoral officers during the conduct of the elections but also during the counting of votes, so that the voting is conducted under conditions of orderliness, order and security.

On election day, officials from the Office of the Data Protection Commissioner and the Commissioner herself will visit polling stations to check their recommendations.