Akar: "The Greeks are myth-obsessed - Greece has left Lausanne"

The Turkish Defense Minister, Hulusi Akar, characterizes the Greeks as "mythologists and sick" in his new statements 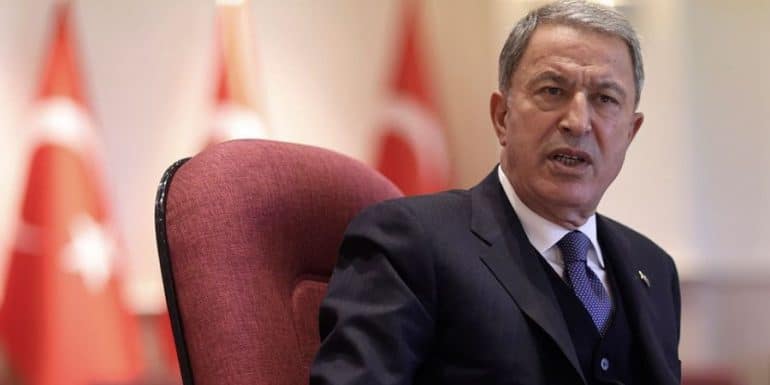 The Turkish Defense Minister, Hulusi Akar, from Isparta, Turkey, characterizes the Greeks as "mythologists and sick" in his new statements, who went a step further regarding the islands, claiming that with their equipment, Greece has effectively withdrawn from itself from the Treaty of Lausanne. Hulusi Akar's statements appeared on the front pages of two Turkish newspapers today. Millet
They have been taken over by mythomania
Akar made the diagnosis for Greece
– Some Greek politicians lie at every opportunity and defame Turkey. In the medical literature this is called mythomania. Lying disease. So much so that they believed the lie themselves. We wish them good luck!
– We work in such a way that the situation is fully under our control.
– They accuse us of being "neo-Ottomanists" even though there is no such thing. There is something called a 'Big Idea'. Nobody talks about it. We talk about dialogue and insist on it. Why; Because we are right, we are strong, we are always ready for dialogue.

Greece is considered to have withdrawn from Lausanne

In statements by H. Akar in the newspaper he states that

"Turkey has friends in the Balkans like Albania and Macedonia. Our army has military cooperation agreements with the armies of the two countries. Both countries suffered greatly from Greece. Greece poses many difficulties to these countries in both the EU and NATO accession processes. They even changed the name of Macedonia. If these countries agree, Turkish bases can be established there. If this is done, Turkey will have encircled Greece in retaliation for the equipment