Erdogan: Greece is not sitting quietly - It has no business getting involved with Egypt

"But of course Greece is not sitting quietly" 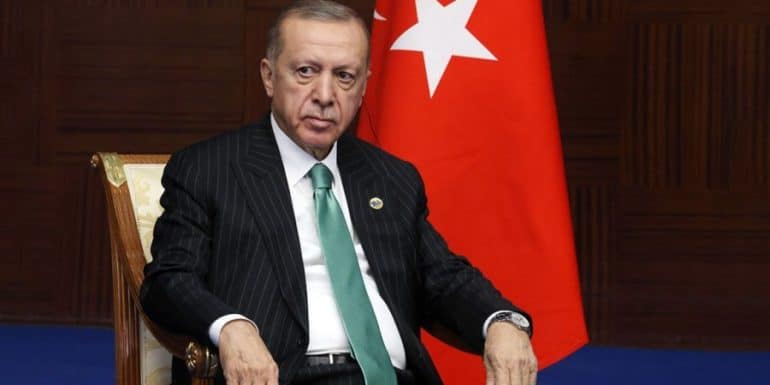 Optimistic that the normalization with Egypt will progress, the Turkish president appeared, speaking to young people in Iconium, even revealing that in Qatar, in addition to the handshake, he also had a 30-45 minute meeting with the Egyptian president, Sisi.

"But of course Greece is not sitting quietly. He is constantly talking here and there about us and in the European Union they are conducting various campaigns (against us). First Allah, will open a new era, after the elections (in Turkey). Of course, in the meeting we had with Mr. Sisi here, I also told him that our relations with the Egyptian people are different from the relations between Turkey and Egypt at the leadership level.

Our relations with the Egyptian people have another history. Of course, in the last 9 years we had a problem. Of course, that evening we took that step, especially after the intervention of the Emir of Qatar, and held a comprehensive meeting with Mr. Sisi for half an hour-45 minutes, after overcoming this issue (of contact). We said that now our ministers, at a lower level, should start traveling and then we should expand and develop these talks. Our only concern - we told him - is to resolve this unpleasant situation between you and Turkey, because there should be no such problems between Turkey and Egypt in the Mediterranean. Of course, we talked about various things. From what I was informed and learned later, he was very happy about this meeting and so were we. Now the process has started. I hope that this process will continue with our ministers and then we will be together in the Mediterranean, because the relations between the Egyptian people and the Turkish people are very different."

Recep Tayyip Erdogan said that Turkey-Egypt relations are much deeper and that Greece, which tried to take advantage of Turkey's bad relations with countries in the region, has no business getting involved in this region and with Egypt.

"We must not leave this dynamic to others. Greece has no business getting involved here. That is why I believe there will be good developments. As you know in the meantime, there were some who wanted to turn our own displeasure with the Gulf countries to their liking. Of course when this was restored, their games crashed. Among them the United Arab Emirates. Here, our relations with the United Arab Emirates are in a very good state. I hope they get even better. Of course, we stir up some circles. In the next period, just as the issue with Egypt has entered a good path, so it can enter the same path with Syria. There are no grudges in politics,” he said.