Eva Kaili: She confessed that she asked her father to hide the 750.000 euros

Eva Kaili confessed that she asked her father to hide the 750.000 euros 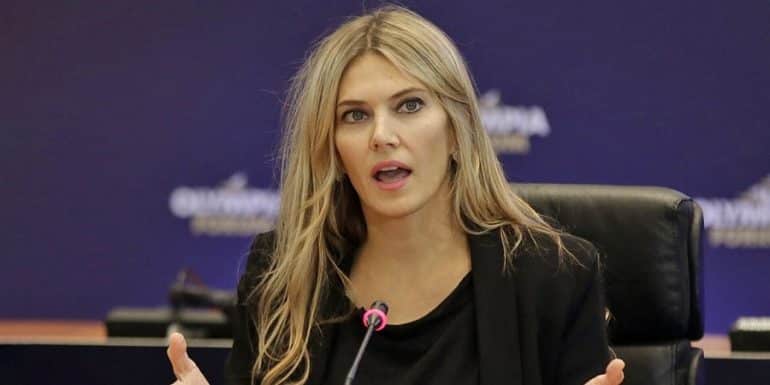 In an important revelation for Eva Kaili, just 24 hours before the pre-trial council in Brussels decides (on Thursday) whether she will remain in prison for Qatar-gate, Le Soir newspaper reports on Tuesday (20/12) that the Greek MEP admitted that she asked her father to hide the money that was in her house.

It is recalled that the Belgian police initially located Eva Kaili's father with 600.000 euros in cash in a suitcase outside a Brussels hotel and then, after deciding that Eva Kaili was not protected by the immunity of MEPs, raided her home and they found another 150.000 euros.

So, according to Le Soir, Eva Kaili admitted that she asked her father to hide the money. "The defendant admitted that she instructed her father to hide the money," Corruption Prosecutor Michel Cleese, who is leading the Qatargate investigations, said in the document for Eva Kaili's arrest on December 9, according to the publication.

"She said that she had known in the past the activity of her partner (i.e. Francesco Giorgi) with Mr. Panzeri and that suitcases of cash had passed through her apartment," adds the Belgian prosecutor. La Repubblica reports the same, stating that Eva Kaili said "it is true, I knew about the activities of Mr. Panzeri and I knew that there were suitcases of money in my house"

According to the publication, "when the police carried out the operation against her partner, Eva Kaili panicked. In addition to instructing her father to quickly hide a portion of the money, the former presenter "tried to warn Panzeri and two other MEPs about the investigation" without specifying who they were in the report citing the prosecutor's document. these two MEPs.

Le Soir also reports that Francesco Giorgi admitted to the prosecutor that he was part of a group used by Morocco and Qatar to influence Europeans. "I did it all for money I didn't need" were, according to court documents cited by La Repubblica, the words Giorgi used to admit the charges against him - money laundering, setting up a criminal organization, corruption. "After breaking down in front of Brussels officials, Giorgi admitted he had acted illegally and expressed remorse," the Italian newspaper reported.

“I am offended that you have access to these documents. Am I the only one following the rules?' was the reaction of Eva Kaili's Belgian lawyer, Andre Rizopoulos.

Confession from Pantzeri as well

The report also states that Antonio Panzeri, who is believed to be the "brain" of the Qatar-gate cabal, "also gave instructions to Giorgi about his partner," with Le Soir citing wiretapping.

After his arrest and the discovery of 600.000 euros in cash at his home, Panzeri, writes the Belgian newspaper, was forced to partially admit his involvement in the scandal that shocked the European Parliament.

"He denied that MEP Mark Tarabella was the recipient of the gifts from Qatar, he partially admitted the facts" of corruption and interventions in favor of Qatar and Morocco, prosecutor Klez writes in the document on Panzeri.