If the "sultan"'s plan fails, then the country is threatened with chaos 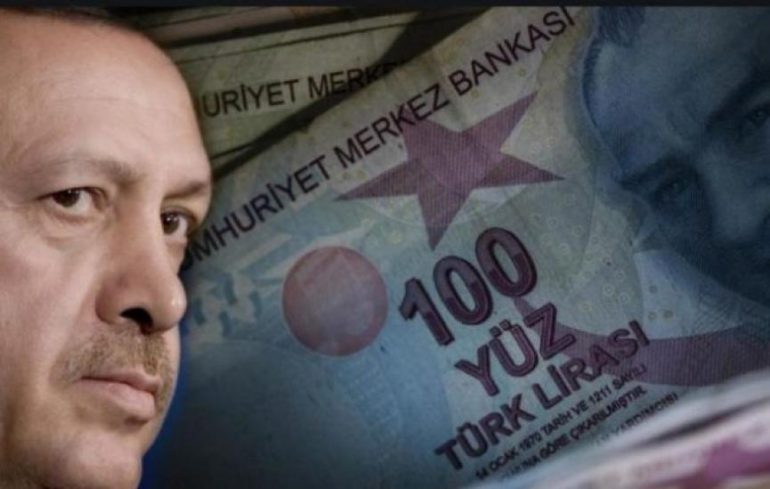 The Turkish currency, after the initial rally caused by Erdogan's statements, has been slipping again for a week against the dollar and the euro. If the "sultan"'s plan fails, then the country is threatened with chaos.

Ten days have passed since the intervention of Tayyip Erdogan, which caused the largest increase in the exchange rate of the pound in decades - by more than 25% in one day. The initial euphoria that prevailed in the presidential palace and the government, however, gradually disappeared and smiles gradually give way to new concerns.

According to George Pavlopoulos in the Economic Post, the value of the Turkish currency against the dollar has fallen by almost 18% in the last seven days. Despite the fact that this is not done abruptly, but gradually, in Ankara they see that this is a downward trend which tends to stabilize, leading the pound step by step back to the cliff.

This time, in fact, things may be more serious than before Erdogan's intervention. This is because, quite simply, if it turns out that even the paper of state guarantees has been "burned" in the face of future losses to depositors and investors, then there is not much left for the "sultan" to do in order to prevent the fatality.

The central bank, after all, has run out of foreign exchange reserves and is meeting its needs with increasing difficulty - mainly through successive swaps with foreigners, mainly from Arab countries, who have tended and continue to lend a helping hand to Erdogan. In the event, however, that there is a need for massive intervention in the markets in order to support the pound, it is doubtful whether there is the "firepower" to do so.

The guarantees were not convincing

It is worth noting, after all, that the guarantees given by Erdogan require depositors to convert their money into pounds for at least three months. In other words, this is a kind of time deposit, in which the state and the banks do not guarantee the returns, but that there will be no further losses.

This move, however, did not seem to convince many. Proof of this is the fact that, according to available data, just $ 3 billion was converted into pounds after the announcements - an amount that represents about 2% of private deposits. Worse still, the rally appears to have been fueled largely not by this "turnaround", but by a new massive central bank intervention in the $ 7 billion markets.

What is certain is that even if Erdogan manages to save time by renewing the guarantees quarterly by quarter in the hope of attracting more - which is doubtful - he will not be able to feel confident that he will last as long as he wants: The next election.

Who will pay the bill

"Even if the new scheme manages to stabilize the pound, Turkey's problems will not end. The inflationary situation from the previous devaluations, the cheap credits and the increases in the minimum wage will continue to increase the prices. If the currency remains stable, the rising cost of Turkish goods will not be offset by the cheaper pound. "This, in turn, will erode the country's competitiveness, undermine its trade balance and leave it dangerously dependent on foreign borrowing in order to bridge the gap between imports and exports," the Economist wrote in an article with entitled "The President of Turkey can not ignore reality for long."

The British magazine also warns of the obvious: That is, the country will be doomed if Erdogan's plan fails. Quite simply, because then it will be the state budget, that is, the taxpayers, who will be called upon to pay the bill.

For his part, Mohamed el-Erian recently wrote that in order for the "complex measures" announced to be successful, one of the following three must be done: interest rate hikes, fiscal austerity (hence austerity and lending restrictions) or an agreement with the IMF.

However, Gulcin Ozkan, a professor at King's Business School in London, told the Financial Times that none of the three were going to happen, as it would be like Erdogan admitting that what he has said so far is error. That is why, he argues, "the announced plan brings Turkey back to the 70s, when a similar policy ended in disaster, pushing public debt to record levels."

What is certain is that, relatively soon, the lies will end and it will be proven who is right.