The two men smiled broadly when they met, at the nursing home where Mr Bersi lives. Mr. Sachs walked towards him vigorously, despite his cane - They hugged 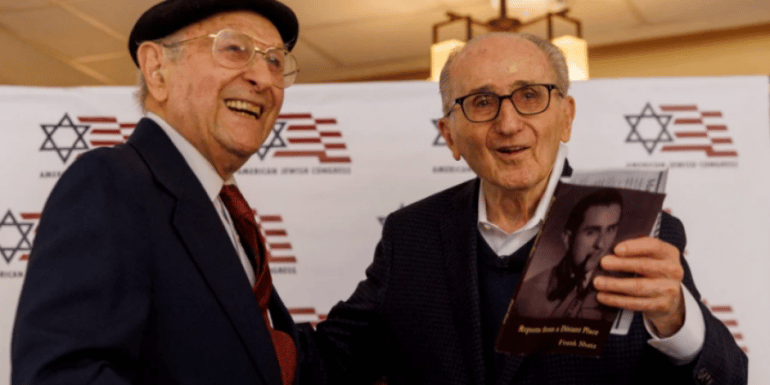 George Bersi and Frank Sachs could have met in the Nazi concentration camps. Or the resistance, in the ranks of which the conquerors fought almost eighty years ago. But as far as the two Holocaust survivors are concerned, they saw each other for the first time yesterday, Wednesday, in Los Angeles.

Mr Bercy, a 101-year-old Los Angeles-based surgeon, goes to work every day at Cedars-Sinai Medical Center despite his age. Mr. Sachs, 96, a writer and columnist, regularly writes for the Virginia Gazette.

Born and raised in Hungary, they were rescued from Nazi concentration camps before migrating to the United States. Their meeting was organized by the American Jewish Congress.

The two men smiled broadly when they met, at the nursing home where Mr Bersi lives. Mr. Sachs walked toward him briskly, despite his cane. They hugged.

"Almost the same day we were rescued from forced slavery, we were in Budapest and we both joined the resistance against the Nazis," Mr Sats said. "We were in the same places, we did the same things, so it is very likely that our paths crossed several times."

Mr Bersi was a Nazi prisoner in the summer of 1944 when he escaped at the age of 23, taking advantage of an Allied attack near the camp that caught the attention of his guards. He joined the resistance in Budapest.

According to a recent column, Mr. Sachs was forced to work in the Carpathian Mountains on a Nazi army railway project when he was able to escape during Allied airstrikes. He also joined the resistance in Budapest.

Mr Satch learned of Mr Bersy's story when he read a profile of the surgeon recently published in the Los Angeles Times. The post was the occasion for the meeting.

"We are fortunate to still remember these historic events," Bersei joked.

The number of Holocaust survivors is difficult to estimate accurately. The US Holocaust Survivor Registry has 195.000 entries, survivors and relatives.