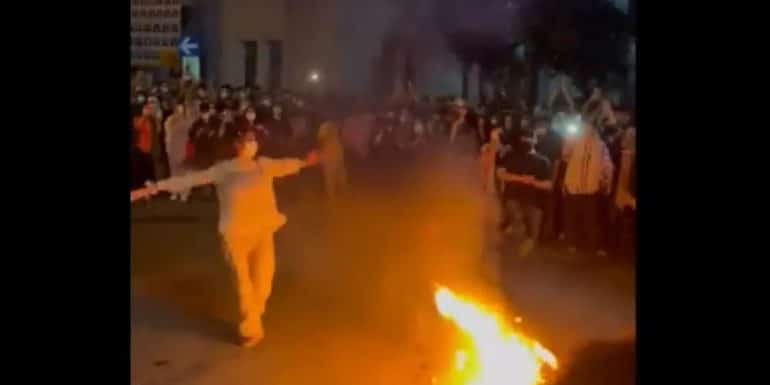 The protests that have erupted in Iran since the tragic death of Mahsha Amini, the 22-year-old woman who was arrested by the country's notorious "morality police" for indecent dress and died three days later, continue unabated.

At least three people have so far been killed in protests over the unfortunate girl, who a large majority of citizens believe was tortured to death by the Basij militia, which is responsible for enforcing the strict Islamic dress code. Activists claim that Amini was hit on the head while in custody, which Iran strongly denies, but has so far failed to calm the wave of anger sweeping the country.

According to the Daily Mail, the protests, led by women, are the most serious that have occurred in Iran in many years. Videos posted on social media show protesters rushing towards police who are trying to break up the protest rally.

Another clip shows protesters tearing up effigies of Iran's supreme leader, Ali Khamenei, and his predecessor, the men who took control of the country after the 1979 Islamic Revolution. In other videos, women burn headscarves like the one is believed to have led to the arrest of the 22-year-old woman and her alleged beating by the morality police.

The protests started in Kurdistan province in northern Iran, where Amini was from, but soon spread to several cities, including Tehran, Mashhad, Hamadan and Tabriz. In Arak, female students shouted the slogan "I will kill those who killed my sister". According to the Human Rights Watch, the videos circulating on social media and the testimonies of the participants in the demonstrations indicate that the authorities are using tear gas and lethal force to suppress the demonstrators.

The anger over Amini's death does not only find an outlet in the streets, but also on social media, where many Iranian women - and not only - post videos showing them speechless cutting their hair, in protest of the oppressive conditions in the country. country.

While some protesters took to the streets of Iran, some women decided to cut their hair as their own form of protest against the death of Mahsa Amini while she was in police custody.https://t.co/CSFG1w1eVS pic.twitter.com/mxOJy9liIG

The large turnout in the protests appears to reflect the widespread resentment of many citizens against Iran's government and the country's president. “Last year, the criminal Raisi put his hands deep in the pockets of Iranians. That which steals from them, invests them in the brutal forces of oppression," Baijn, a farmer from Khoramabad who participated in the protests, told the Daily Mail.

While some protesters took to the streets of Iran, some women decided to cut their hair as their own form of protest against the death of Mahsa Amini while she was in police custody.https://t.co/CSFG1w1eVS pic.twitter.com/mxOJy9liIG