Mitsotakis: The leaders saw from the dialogue with Erdogan who provokes 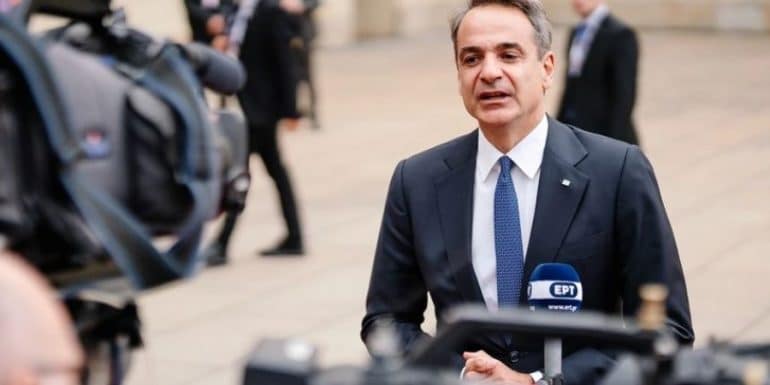 The answer he gave to Recep Tayyip Erdogan on Thursday night at the Prague Summit when he was challenged was mentioned by Kyriakos Mitsotakis, attending Friday's meeting.

As the Greek Prime Minister pointed out, "Greece never provokes, it always responds with confidence when provoked" adding that "I had the opportunity in front of the leaders to repeat what I said at the UN General Assembly".

"It does not make sense to accuse Greece of increasing the tension in the Aegean when Turkey even raises issues of sovereignty of the islands" added Kyriakos Mitsotakis who emphasized that "it is impossible to defuse as long as this rhetoric continues".

Nevertheless, Kyriakos Mitrsotakis noted that "Greece is not closing the door to dialogue" stressing that "we are sure that we have international law on our side".

As the Greek Prime Minister explained about what happened on Thursday night at the leaders' dinner at the Prague Summit, "it was a first-class opportunity for even my colleagues who do not know enough about the subject to understand who is the one who provokes and raises the tone and which country confidently defends its rights."

Erdogan's provocations are in full swing in Prague

The Turkish president, Recep Tayyip Erdoğan, came to Prague and did not listen to his complaints, neither in the security panel, which he participated in, nor in the bilateral contacts, which he had throughout yesterday, according to information , from the Greek side.

The mood he received from his interlocutors was the recommendation to stop this specific tactic and follow the path of dialogue on the basis of International Law, according to the same information.

The Greek delegation was aware that he had asked to speak during the dinner. During his intervention, he appeared negative regarding the EU's handling of Turkey and, as he is not used to in such cases, he attacked Greece.
praga-52

In the family photo of the informal Prague Synod, the distance between the two leaders was great

The Greek government points out that the prime minister, Kyriakos Mitsotakis, had no chance of remaining silent and leaving unanswered what the Turkish president said.

According to the Greek side, the response of Kyriakos Mitsotakis seems to have surprised Recep Tayyip Erdogan, who is used to monologues, which - according to the same people - was also reflected in the "alloping" of the press conference he gave later, during the in which in other places he threatened that "we will come at night" and in others he said that he does not question the sovereignty of the Greek islands and that Greece is the one that does not come to the dialogue.

The same persons anticipate that the prime minister will give answers to his statement by attending the informal Summit of the 27 European leaders in Prague, and also later at the press conference.

The Greek government points out that Greece's positions are known and that no one can question Greek sovereignty over the islands of the Greek Aegean. Members of the Greek mission in Prague emphasized that "Greece does not provoke. But when challenged, he will respond, as Kyriakos Mitsotakis did at the leaders' dinner. Everyone saw what was posted. Mr. Erdogan left the Summit more isolated than he came."

Prime Minister Kyriakos Mitsotakis met today with his Albanian counterpart Edi Rama, on the sidelines of the European Political Community Summit in Prague.

During the meeting, the two leaders exchanged views on the entire range of bilateral relations and regional developments and confirmed their willingness to deepen bilateral cooperation. Kyriakos Mitsotakis underlined our country's constant support for Albania's European path, in accordance with the terms and conditions set by the European Council.

The effects of the Ukrainian crisis on the Western Balkans and the need to maintain stability and strengthen the region's energy security were also discussed.

The Prime Minister underlined the constant interest of Athens in the protection of the rights of the Greek National Minority in Albania, with a particular emphasis on securing their property rights.

He also referred to the demarcation of the maritime zones of the two countries and stressed that submitting the issue to the International Court of Justice in The Hague, as agreed, will further strengthen good neighborly relations, utilizing their full potential.

Kyriakos Mitsotakis had brief meetings with the Prime Minister of North Macedonia Dimitar Kovačevski and the President of Kosovo, Vjosa Osmani-Sadriu. The Prime Minister expressed Greece's steadfast support for the European perspective of the Western Balkans, with the conditions set by the EU.

Issues of common and regional interest were also discussed, with an emphasis on energy cooperation and infrastructures that increase interconnectivity in the Balkan Peninsula.

The energy crisis and the consequences of the Russian invasion of Ukraine were discussed. The Prime Minister informed his Portuguese counterpart about the latest developments regarding the escalation of Turkish aggression.