Zelensky calls on Russians to surrender - "Opportunity to survive"

The whole message of Volodymyr Zelensky is the same 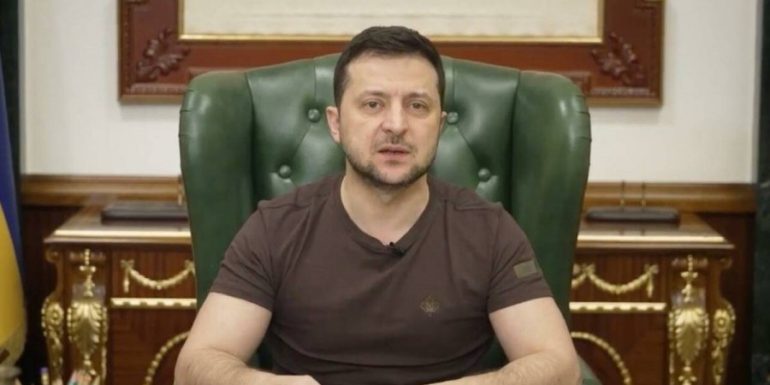 For another day the war in Ukraine continues with many losses.

Volodymyr Zelensky informs his citizens almost daily about the course of the battles in various cities of the country, the negotiations, while he also announces various measures. In his latest message, this morning he called on the Russian soldiers to surrender to the Ukrainian forces.

"On behalf of the Ukrainian people, I give you a chance. The chance to survive. If you surrender to our forces, we will treat you as we should treat people. "As human beings, with dignity," he said. Your phone calls to your family. We hear it all. We draw conclusions. We know who you are. "

He also referred to a Russian journalist who broke into a Channel One set with anti-war banners. "I'm grateful," he said. To those who are not afraid to protest. "Unless your country is completely closed off from the rest of the world, turning into a very large North Korea, you have to fight."

The whole message of Volodymyr Zelensky

Free people of a free country!

The 19th day of resistance is over. Historical war. Another difficult day. Peace is approaching for Ukraine.

As before, the enemy is confused. They did not expect such resistance. They believed in their propaganda, which has been lying to us for decades. They are already beginning to understand that they will not achieve anything with the war.

We take the trophies and use them to protect Ukraine. Today, Russian troops are, in fact, one of the suppliers of our army equipment. They could not imagine such a thing in a nightmare.

And I want to tell the Russian soldiers. Those who have already entered our country. And those who are going to be sent to fight against us.

Russian conscripts! Listen to me very carefully. Russian officers! You already understand everything. You will not get anything from Ukraine. You will get lives. There are many of you. But your own life will be taken away.

But why should you die? For what reason; I know you want to live. We hear your conversations from eavesdropping, we hear what you really think about this absurd war, about this disgrace and about your state. Your conversations with each other. Your phone calls to your family. We hear it all. We draw conclusions. We know who you are.

Therefore, I offer you a choice. On behalf of the Ukrainian people, I give you a chance. The chance to survive. If you surrender to our forces, we will treat you as we should treat people. As human beings, with dignity. In a way that your army did not treat you. And in the way that your army does not behave in ours. Choose!

Soon the number of damaged Russian helicopters will reach hundreds of units. They have already lost 80 warplanes. Hundreds of tanks and thousands of other pieces of equipment.

In 19 days, the Russian army has lost more in Ukraine than in two bloody and multi-year wars in Chechnya. For what reason;

I am grateful to those Russians who do not stop trying to convey the truth. To those who fight misinformation and tell the truth, the real facts to their friends and loved ones. And personally to the woman who entered the Channel One studio with an anti-war poster. To those who are not afraid to protest. Until your country is completely closed off from the rest of the world, turning into a very large North Korea, you have to fight. You must not miss your chance.

The European Union has approved the fourth package of sanctions against Russia. The fourth - and I'm sure it will not be the last.

All our partners are informed about the crimes of the invaders against the citizens and the local self-government in the areas of Hersonissos and Zaporizhia. In the temporarily occupied areas. There will be an answer to this. Necessarily. For disturbed humanitarian corridors. Necessarily.

During the day of March 14, 3.806 Ukrainians were evacuated from cities and towns in the Kiev and Luhansk regions.

Our XNUMX-tonne convoy with what is most necessary for Mariupol still remains in Berdyansk. For three days now. But we will try. We will do everything to ensure that the residents of Mariupol will receive food, water and medicine.

In discussions with friends and partners of our state, I provided full information on the actions of the invaders on Ukrainian soil. Every aggressive action of the invaders pushes the world only to new sanctions.

The discussion with Israeli Prime Minister Bennett was also important. As part of a negotiating effort to end this war as soon as possible. With a just peace.

Our delegation also worked on this issue in the negotiations with the Russian side. Pretty good, as I was told. But to see. They will continue tomorrow.

The Cabinet of Ministers of Ukraine agreed on a package of decisions to support our economy. So the business works. So that people have jobs. Where security allows. Where people are ready for it.

First, we start tax reform. Instead of VAT and income tax we give a rate of 2% on turnover and simplified accounting. For small businesses - this is the first and second group of sole proprietorships - we define the voluntary payment of a single tax. That is, if you can - pay. If you can not - no questions asked.

The second is the maximum deregulation of businesses. We cancel all inspections for all companies. So that everyone works normally. So that the cities come to life. So that life goes on where there are no hostilities.

The only condition is to ensure the normal operation of your business under Ukrainian law. These are just the first two steps in our tax reform. Will be continued.

I have just signed a decree on the awarding of state awards of Ukraine to 234 soldiers of the Armed Forces of Ukraine who showed personal courage and heroism in the fight for our land. For our independence. 59 of them posthumously.

May the memory of all those who gave their lives for our state live forever!

Eternal gratitude to all our heroes!