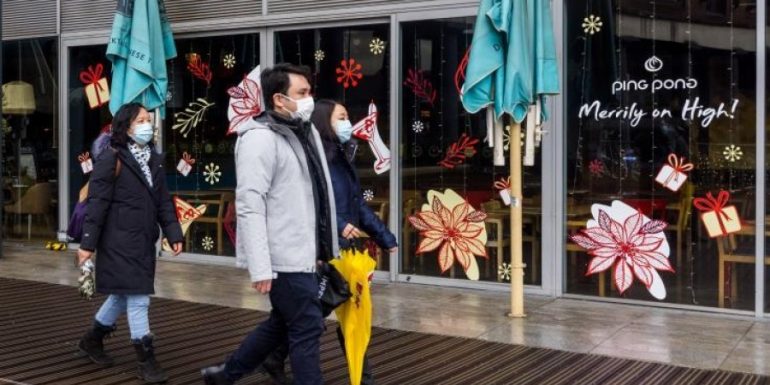 "Moderately optimistic" that the spread of the Omicron mutation in London has stabilized, Neil Ferguson, a professor at London's Imperial College London, one of the most influential epidemiologists in deciding how to treat the pandemic in London, told BBC radio.

"In the critical age group of 18-50, starring in the Omicron epidemic, infection rates may have stabilized. "It's too early to tell if they're starting to decline," said Professor Lockdown. We believe that if someone has never been infected before, if they have not been vaccinated, they have a approximately 1/3 reduction in the risk of being admitted to a hospital and possibly a 2/3 reduction in the risk of dying from Omicron. (…) Vaccines have also been able to cope with serious cases ".

The British expert added, however, that this does not mean that the coming weeks will not be difficult for the NHS health system. He said hospitalizations may continue to rise as older people start to be affected more slowly by Omicron, and noted that large increases in cases are likely to continue due to students returning to school this week.

At least six NHS district administrations have already declared "critical incidents", which means they may not be able to provide emergency care to patients without staffing from other areas.

Official figures for hospitalizations in London, the focus of Omicron so far, justify the optimism that the cases of the new mutation will stabilize. Hospital admissions in the capital on January 1 had fallen to 314, a decrease of 28% compared to the previous Monday.

NHS chief of staff Chris Hopson noted that while shortly after Christmas, the daily increase in imports to London had reached 15%, the last three days did not exceed 3%.

Mr Hopson said the figures showed "growing optimism" that the health system in the British capital would cope, although he noted that we would have to look at the impact of the holidays on cases and hospitalizations in the coming days.

Ministers are also encouraged to keep the number of intubated patients at constant levels and to keep coronavirus deaths at relatively low levels. The 42 deaths confirmed on Monday represent a reduction of 70% compared to the previous Monday.

At the same time, the rapid spread of Omicron has begun to cause problems in the operation of public services, beyond hospitals, due to mass absences of employees. The latest aggregate data for the past seven days showed that almost 1,2 million people in the UK were positive for the coronavirus.

According to reports, Ministries have begun examining whether they would need military assistance to staff services, critical infrastructure and market supply chains.

In England, one in ten NHS workers is reportedly absent from their post, with half having a positive Covid diagnosis. Schools open this week with teachers' unions warning of significant shortages of teaching staff.

Many municipalities have been forced to delay garbage collection and recycling, while in various parts of the country those workers who return to their offices today have to deal with reduced train services due to lack of staff. Employee absences are also reported by many private companies and stores, which may be forced to operate part-time.

The situation will be assessed today with his Ministers by Prime Minister Boris Johnson, who on Monday, in fact, announced in advance that no stricter restrictive measures will be taken for England, at least for the time being.

In an interview with the Daily Telegraph, meanwhile, the chairman of the UK's Vaccination and Immunization Committee, Professor Sir Andrew Pollard, said more supportive doses should not be offered to the general population until there is more evidence to support them. . "We can not vaccinate the planet every four to six months. "It is neither sustainable nor economically viable," said the British expert, who is also the head of the scientific vaccine development team at the University of Oxford.