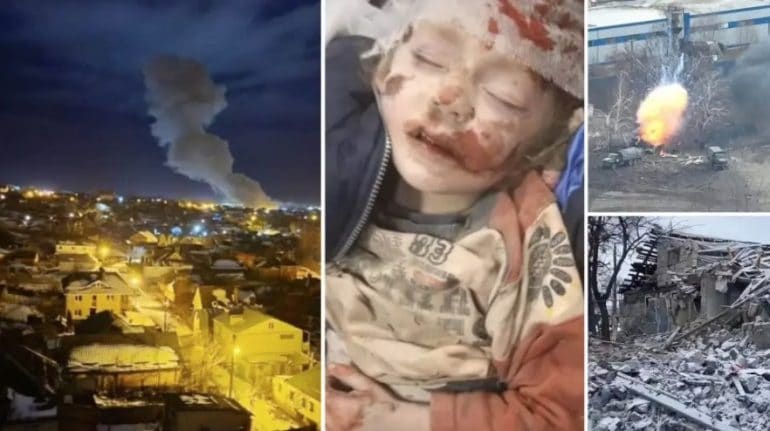 Torture in Mariupol, Irpin and Kharkiv - Waves of refugees flee their homes as Putin bombs - The evacuation of civilians from Sumy and Irpin has begun

In her face Ukrainian holding her child tightly captures the fear and terror of all women experiencing the horrors of war.

Waves refugees "They are leaving their homes to escape Putin's bombs," the French newspaper wrote on its front page.Liberation».

The Russians are bombing Ukrainian cities violently with the international community watching with bated breath the torment of people who experience in their skin the expansive aspirations of his strong man Kremlin.

Yesterday the city became the target of heavy bombardment Sumi. The image of the child injured by the Russian fires is shocking. In all, more than ten people were killed in Russian airstrikes on Sumi, in northeastern Ukraine. This was announced by the local authorities. "Apartment buildings have been bombed in some places in Ukraine," said Dmitry Zivitsky, head of the regional government, in a statement posted on the social networking site Facebook.

The head of the #sumy Regional State Administration, Dmytro Zhyvitsky, reports that #Russian planes dropped bombs on residential areas of the city.

There are dead and wounded, including children. pic.twitter.com/9YaKRvACsH

Among the ten people killed when houses were bombed, even in central Sumi, were children, he continued. Four Ukrainian soldiers were also killed in what Mr Zivitsky called an "unequal battle with the Russian army."

This is what residential buildings in #sumy look like after a night of air strikes. pic.twitter.com/z2j9Gl6A02

The humanitarian crisis can only get worse. Where can the civilian population find a safe way out? To the left; To the right; Waiting for the night? To prefer the roads or to go from the fields?

Rescuers in #sumy eliminated the aftermath of a nighttime air strike on the city.

The bodies of civilians were pulled out from under the rubble of houses - 9 people were killed, including two children. pic.twitter.com/zKeOJZoB9O

The women take their children, the elderly, pets, personal memories with them and leave their homeland. The Russian army is bombing indiscriminately, determined to punish Ukraine for its unexpected resistance.

It does not allow civilians to leave the country through humanitarian corridors, nor does it warn them of the impact of rockets, mortars, artillery, drones or fighter jets. At the same time, more than 1,7 million Ukrainians are already living in exile, the exodus of Ukrainians has just begun.

No increase in radiation levels have been reported at the sitehttps://t.co/gs6pbTwH1M pic.twitter.com/ZdBXVPDBdS

The martyrdom of refugees

The war in Ukraine is the biggest humanitarian crisis in Europe for many years. For United Nations High Commissioner for Refugees, is "the fastest growing refugee crisis in Europe since World War II".

The martyrdom of Ukrainians in Mariupol the Irpin and the Kharkiv The journalists who were able to see up close the magnitude of the tragedy but also the incredible determination of the nurses and doctors to deal with it capture in their reports.

VIDEO: Aftermath of the Russian military operation in Kharkiv, Ukraine.

VIDEO: No safe corridor, just a plank for those fleeing to Kyiv.

Ukrainians flee south towards Kyiv across a bombed-out bridge as Russian forces continue to bombard the town of Irpin, northwest of the capital pic.twitter.com/XVfXA94sHH

About 2.000 civilians have been evacuated so far from the city of Irpin, near the Ukrainian capital Kyiv, according to Ukrainian police.

The images from Irpin are shocking. International media broadcast footage showing civilians trying to leave the area and being shot. What follows is panic, with many of them running to be saved or falling down to avoid the bullets.

Meanwhile, the Russians are tightening the noose around Kyiv, while the focus of military operations is Mariupol and Odessa, which, as Ukrainian President Volodymyr Zelensky warned, Russian military forces are preparing to bomb.

As hunger and thirst begin to be felt in the bombed-out cities and most of the drugs - especially painkillers - are almost exhausted, Vladimir Putin plays the international community in a cynical way: pretending to accept the creation of humanitarian corridors in order to leave the civilians safely but also to distribute food and medicine.

However Odessa the KievThe Mariupol the Irpin and the Kharkiv"Like other cities in Ukraine, an entire country, a European democracy, is besieged by a 'dictator who has already proved that his most basic humanitarian rules are completely foreign to him.'