Ukrainians are preparing for the worst 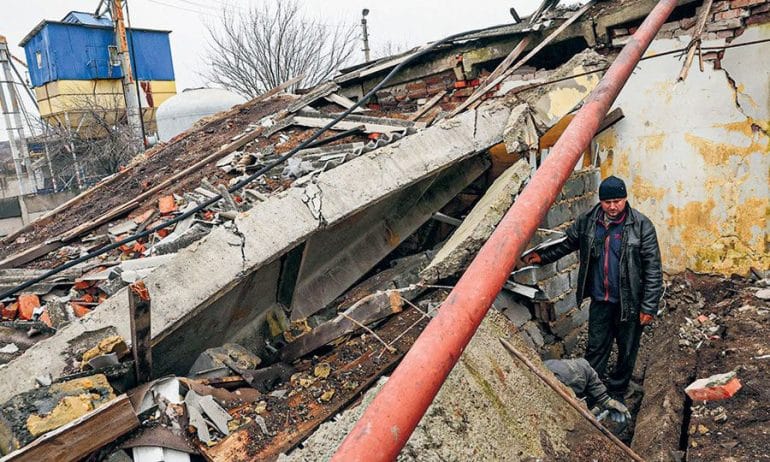 With the mercury expected to drop to -11 degrees in many parts of Ukraine, including Kiev, in the coming days, the country's government and Western allies are making preventing a humanitarian disaster due to the damage caused by the Russian bombing of the country's energy grid and other political infrastructure. After all, the war fronts have, with few exceptions, almost frozen, since after the recapture of Kherson by the Ukrainians, both camps have fortified themselves in more stable positions, while adverse weather conditions make offensive operations very difficult.

The Vatican's intervention is positive, but there are currently no terms for negotiation with Zelensky, the Kremlin says.

Despite a brief respite in Russian bombing in recent days, Volodymyr Zelensky prepared his compatriots for new blows from the enemy. "We understand that the terrorists are planning new attacks. We know this as a fact," the Ukrainian president said in his latest video message. "As long as they have missiles, unfortunately, they are not going to rest," he added.

Snow-covered Kyiv was visited yesterday by Norway's Foreign Minister Aniken Hewittfeld, who described the situation in the Ukrainian capital as "desperate" as, she said, "many residents of the city face the dilemma of fleeing or freezing." The way Russia conducts war is characterized by unprecedented cynicism." For his part, the mayor of the city, Vitali Klitschko, said that it is possible that the authorities will transfer some of the three million residents of Kyiv to other parts of the country, where basic services are less vulnerable to Russian attacks. State energy company Ukrenergo said yesterday that electricity was still 27 percent short of needs due to the fallout from the previous wave of Russian bombing. The situation is also difficult in Kherson, which the Russian army has been systematically bombarding since it was forced to leave it.

In Brussels, the EU's high representative for foreign policy Josep Borel chaired a meeting of foreign ministers of the member countries on humanitarian aid in Ukraine to address the problems in the fields of electricity, heating and water supply. In the next three days, foreign ministers and senior NATO officials will meet in Bucharest on the same issue.

Are they leaving Zaporizhia?

On Sunday, rumors circulated from the Ukrainian side that the Russians were preparing to abandon the Zaporizhia nuclear power plant, Europe's largest, which they seized in the first weeks of the war. "One gets the impression that they are packing their bags and stealing whatever they find available," said the station's Ukrainian director, Petro Kotkin. However, Kremlin spokesman Dmitry Peskov categorically denied the possibility of a Russian withdrawal.

In other statements, the Russian official welcomed Pope Francis' proposal to mediate an end to the war through negotiations between Moscow and Kiev, but argued that the Zelenskyi government's stance made the implementation of that proposal impossible. "Of course we welcome such a political will, but given the de facto and de jure situation we have now on the Ukrainian side, this negotiating platform cannot find a response," Vladimir Putin's spokesman argued.

In an interview with the Russian news agency RIA, the US chargé d'affaires in Moscow Elizabeth Rudd said that US-Russian consultations are continuing on the possible release of basketball player Brittney Greiner and ex-Marine Paul Willard, who are serving multi-year prison sentences in Russia for drug and espionage cases respectively . The Russian government is open to a prisoner exchange with Washington, demanding among other things the release of Victor Bout, who was jailed in the US for illegal arms trafficking.