Provocative Erdogan showed the UN a photo of dead babies: "Greece is turning the Aegean into a refugee cemetery" (vid)

New challenges and fake news from the Turkish president 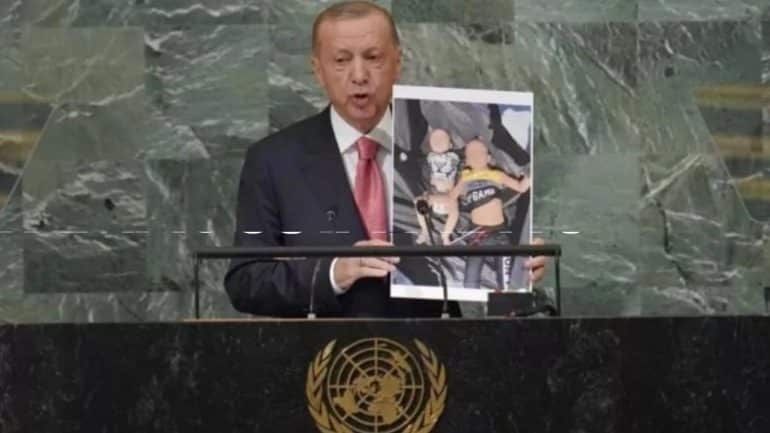 From the floor of its 77th General Assembly ΟΗΕ, the Turkish president Erdogan he said that "Greece is converting the Aegean in a refugee cemetery with its illegal and reckless pushbacks".

"We see that the immigrant pushbacks from the Greece they increase. Greece is turning the Aegean into a refugee cemetery, while we are working to prevent the bodies of new babies like Aylan from washing up on the shores," said the Turkish president and added:

“Last week, a baby, Asim - aged just 9 weeks - and 4-year-old Abdulvahab died after the boat they were on was sunk by Greek security forces. Greece is committing crimes against humanity. The Greeks are tyrannizing the refugees in the Aegean and the Eastern Mediterranean".

At this point, in fact, the Turkish president tried to hold her accountable European Union and ΟΗΕ, calling on them "to say stop to such crimes, which are crimes against humanity".

In addition to the "inhumane push-backs" of irregular migrants to the Aegean, Greece also implements "oppressive policies of discrimination" against the Muslim Turkish minority," Erdogan added.

"In the Aegean and the Eastern Mediterranean, we want a settlement once and for all, which is in accordance with the rules of good neighborliness and on the basis of international law."

The Turkish president described the efforts of those who seek adventure as ridiculous and explained that the responsibility for stability and security in the Eastern Mediterranean depends on respecting the rights of all sides.

At this point, he attempted to place the responsibility for the escalation of tension solely on Greece, calling on it to "abandon the policy of provocations and escalation" and respond to Turkey's calls for cooperation.