Syria: At least 21 civilians dead, including children from bombings

At least 21 civilians, including children, were killed yesterday Friday in northern Syria 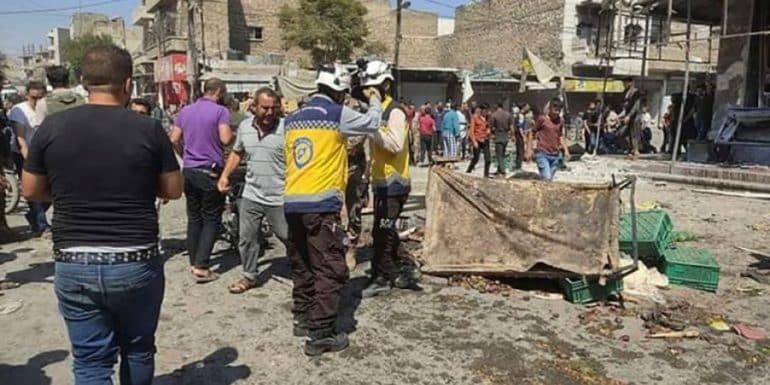 At least 21 civilians, including children, were killed yesterday Friday in northern Syria by the shelling launched by forces close to the Syrian regime and by a strike by the Turkish army.

Turkey has deployed troops in the north of the war-torn country with the support of Syrian rebel groups. Turkish soldiers are conducting operations against Syrian Kurdish forces who control most of northern Syria.

Yesterday Friday at dawn, a Turkish drone attack hit "a center for minor girls" in the city of Smuka, near Hasakeh in northeastern Syria, killing "four children and injuring 11", the autonomous Kurdish administration said in a statement.

The account was confirmed by the Syrian Observatory for Human Rights, which clarified that the children were sleeping.

In al-Bab, a town controlled by Ankara-backed Syrian rebels on the Syrian-Turkish border, "pro-regime artillery fire against a market killed 17 civilians, including six children, and injured 35" people, added the Observatory.

An AFP correspondent in the area said he saw residents and rescuers rushing to remove the injured, mostly children.

Farhad Sami, a spokesman for the Syrian Democratic Forces (SDF, a Kurdish-dominated armed group), said his forces had "nothing to do" with the al-Bab strikes.

Turkey has been threatening since May to launch a major offensive against Kurdish forces that control most of northeastern Syria.

Since July, Turkish drones have increasingly struck areas controlled by the SDF, according to the Observatory and Kurdish officials.

Yesterday, Turkish President Recep Tayyip Erdogan stated that Ankara "has no ambitions" against Syrian territory. He even added that he wishes his country's relationship with Damascus to "move into another phase", believing that the improvement of bilateral relations will contribute to peace in the region.