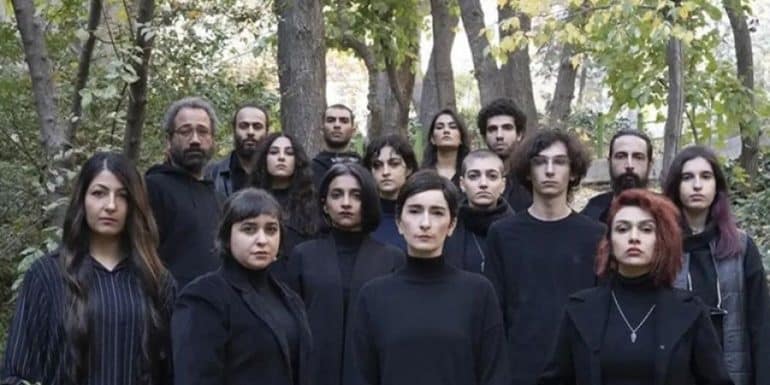 A dozen Iranian actresses who did not wear headscarves gathered to show their support for the protests in Iran, according to a video posted on social media.

The small gathering is the latest protest by Iranian artists aligned with the protest movement sparked by the death of 22-year-old Mahsa Amini after she was arrested by moral police for violating the dress code that requires Iranian women to be veiled.

The short video shows filmmaker and actress Soheila Golestani walking in a park bare-headed, pausing at the foot of a staircase and looking into the camera. He is accompanied by eight other women and four men, who strike the same pose without saying a word.

The exact location is not apparent.

Soheila Golestani posted the video on her Instagram account late Sunday night and wrote: “the show is over and the truth is out. Our true heroes are the anonymous ones."

The video was also posted by filmmaker Hamid Pourazari, who was also present at the park. All the participants were actors, according to the London-based news website Iran Wire.

Since the beginning of the protests, many Iranian artists have defied the Iranian regime by removing the headscarf.

Among them, the actress Taraneh Alidoosti, who stated that her intention is to remain in her country at all costs.

Two more famous actresses, Hengameh Ghaziani and Katayoun Riahi, have been arrested for their support of the protest movement. Hengameh Ghaziani was arrested on November 20 and released on bail, according to the IRNA news agency.

Other Iranian film personalities in jail include Mohammad Rasoulov and Jafar Panahi, who were arrested before the protest movement began.