Transmission chains in schools are increasing 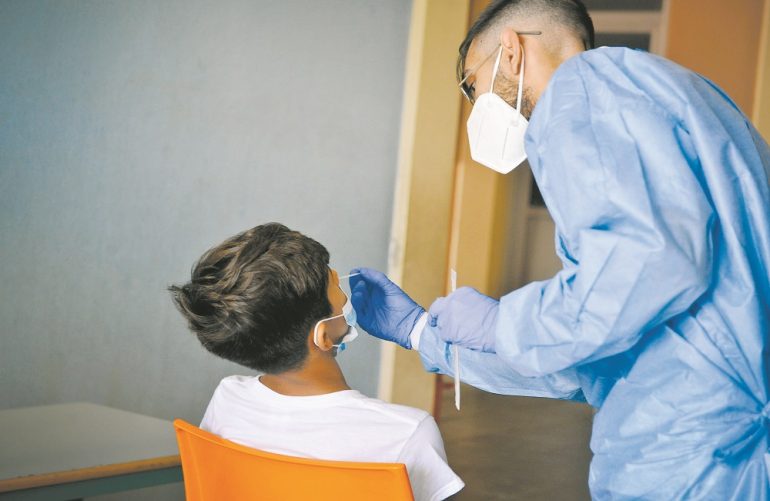 Concern and concern have prevailed in the scientific community since occurrence of active virus transmission chains. The whole issue was discussed extensively at the last meeting of the members of the Advisory Scientific Committee, while It is not ruled out that with the return of the Minister of Health from Brussels, the taking of specific measures will be discussed again. The problem is mainly the observance of the protocols in the schools, with the directorates doing what they want. at a time when unvaccinated teachers and students are not following the measures and creating a series of cases.

As "P" is informed, yesterday lost the battle with the 51-year-old with the coronavirus, who was negative of the virus and consequently of the vaccination, fell ill, refused to be hospitalized and died at his home. In fact, he seems to be behind a chain of transmission of the virus in a school in Larnaca, as he was a teacher by profession. Sources told "P" that the teacher in question was walking around the school without wearing his mask, with the result that, after he was found to be positive for the virus, his entire class and other colleagues were restricted.

They ignore the protocols

Of great concern is the fact that transmission chains in primary and secondary schools have recently increased. Overall, this period There are more than 50 school-related virus transmission chains. A large contamination chain was detected in a secondary school when students and teachers had traveled abroad. Upon their return to Cyprus, positive incidents were found, with the transmission chain counting at least 20 cases. Cases reportedly increased because the school administration called on students and teachers to return to school and not be restricted while being positive for the virus. This incident raises many questions, as the protocols of the Ministry of Education are violated, with the tracking team trying to locate all the cases and their contacts in an effort not to grow this chain. From the data of the Ministry of Health, it seems that in the age group of 6-11 years, from the first ten days of November until December, the number of positive cases is rising at an alarming rate. Specifically, from November 6 to December 3, 1.269 cases have been recorded, while only for the dates November 27 to December 3, a total of 456 positive cases have been identified. Regarding the age group 12-17, which concerns the children attending secondary schools, during the same period 1.114 cases have been identified, while only for the week 27 / 11-3 / 12 354 cases were recorded. In addition, transmission chains are observed in workplaces, but also in entertainment centers. Information from the Ministry of Health states that there is a cluster that started from an entertainment center in Nicosia and counts a total of sixteen cases, both patrons and staff. What causes great concern and headache to the tracking team, but also to the Ministry of Health is the fact that many do not follow the health protocols after their diagnosis and do not declare their contacts in order to be identified and limited.

Following a decision of the Council of Ministers on November 15 to shield the adult population through the administration of the booster dose, the Ministry of Health announced yesterday that the booster vaccination for people aged 18 and over begins today, given that a period of six months has passed since the completion of the booster their shape. Increasing vaccination coverage is considered a priority in Cyprus, but also throughout Europe to pave the way for a way out of the pandemic. As EU Commission President Ursula von der Leyen said on Monday, the EU's goal is to ensure that 70% of the world's population is vaccinated by the middle of next year. In Cyprus, however, the measures announced by the Ministry of Health seem to be enough to persuade citizens to get vaccinated, with experts hoping that compulsory vaccination will not have to be implemented. The now infamous "blockade" on the unvaccinated enters into force on 15 December. The "exclusion" plan essentially includes catering and entertainment establishments, places related to culture, stadiums, but also hotel units.

Yesterday, the Minister of Health, Mr. Michalis Hadjipandela, participated in the work of the EU Health Council. The discussions focused on the developments in relation to the coronavirus pandemic, with the Ministers of Health exchanging views. In his speech, the Minister of Health referred to importance of vaccine efficacy, emphasizing the need to accelerate booster doses. In addition, he stressed the need to adopt a common approach at EU level on travel restrictions, but also on the measures that can be taken to limit the increase in cases. Mr. Hadjipandella also informed his counterparts that the Ministry of Health has taken a decision to start vaccinating children aged 5-11 as soon as pediatric vaccines are available in the Member States. The Minister made special reference to the need to improve the accessibility and availability of medical devices, noting that small Member States, such as Cyprus, have a real difficulty in securing innovative medicines. During the Council's work, developments were reviewed in relation to the establishment of the HERA service and ministers exchanged views on the Proposal for a Regulation establishing a framework for measures to ensure the supply of the necessary medical countermeasures to deal with health crises at European level. . In this context, the "27" agreed on equal access for all Member States to medicines and medical devices, as was the case with the coronavirus vaccine. Speaking during the discussion, the Minister of Health, after welcoming this decision, supported the need for the timely adoption of a framework that will ensure the supply of new and innovative medicines, especially in times of health crisis.