Archdiocesan: The polls are closed, the counting begins

Within 3 days, the Holy Synod will choose the Archbishop from the three persons that have already been established 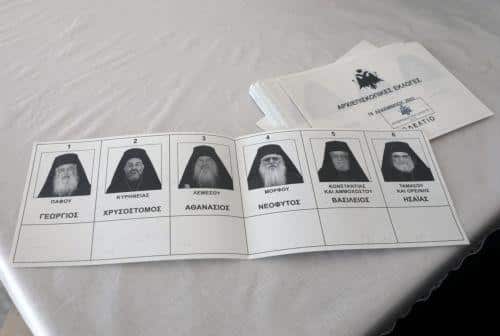 The voting for the election of the new Primate of the Church of Cyprus, which started at 18 on Sunday morning, was completed at 00:10.00, with a break of one hour at noon.

After the end of the voting, the local counting began in the polling stations. Once the count is complete, the Vote Count Sheet will be completed and sealed and the results will be faxed to the General Superintendent of Archdiocesan Elections.

The presiding officers, who remain at the Election Centers with the ballot box, are instructed to take a photo of the Vote Count Sheet with their mobile phone and send it electronically by email.

The Vote Counting Sheet includes the votes of the candidates numerically and in writing, while the results, aggregated, for 942 centers, will be issued by the Office of the General Treasurer, in the Archdiocese.

With the election process over, the next three days are protest days. After the expiration of the three days, the General Superintendent of Archdiocesan Elections will collect all these objections, if any, and will have to deliver them to the Overseer and the Holy Synod.

According to the Charter of the Church of Cyprus after the 3 days have passed, within 5 days the Holy Synod must meet to study the objections, ratify the result and establish the triumvirate.

Subsequently, within 3 days, the Holy Synod will choose the Archbishop from the three persons that have already been established.