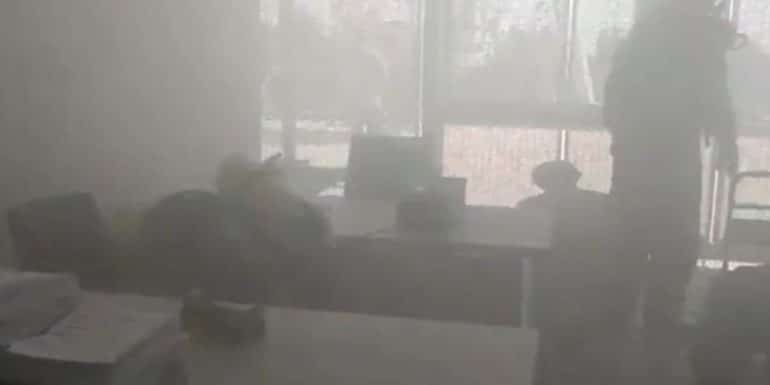 Rescue of trapped people and extinguishing of fire, foresaw the exercise scenario carried out on Thursday morning by the Fire Service at the Regional Office of the Cyprus Electricity Authority in Larnaca.

In his statements, the spokesperson of the Fire Service Andreas Kettis stated that "the Service, in the context of the Fire Safety Week and its operational readiness, today conducted a rescue and firefighting exercise in collaboration with the Cyprus Electricity Authority, at the Regional Office in the Regional Office. The aim of the exercise is to test the action plans of the Fire Service and concern response in tall buildings and especially in cases where office and work staff are housed, to test the firefighting systems of this building, but also the motor and other equipment we have for such cases ".

At the same time, he continued, "the internal action plan of the EAC is being tested, which provides for the activation of the fire brigade, the evacuation of the building, the direction of the office staff in a specific area and the registration of the staff of the Authority. All this is part of the readiness of the Fire Service but also of any large Organizations that house enough staff in large building complexes ".

Regarding the scenario of the exercise, Mr. Kettis said that "it involved a fire in an office on the second floor of the building, in which two people were trapped. Members of the Fire Brigade entered the building through the stairwell, located the two people, rescued them and the fire was extinguished, "he said, noting that" the two people were transported by ambulance to the First Aid Department of Larnaca General Hospital. "

He added that "two people who were also trapped on the second floor of the building, approached using a telescopic armored vehicle of the Fire Service and their rescue was achieved".

Answering a relevant question, Mr. Kettis said that "in the framework of the cooperation of the Fire Service with the Police and the Aviation Operations Unit (MAEP) based at Larnaca airport, an exercise took place on Wednesday, May 18. According to the scenario of the exercise, there was a fire in the facilities of MAEP at Larnaca airport and the fire station of the airport, which borders the Unit, as well as the Fire Stations of cities responded to extinguish it, based on the action plan ".

He also noted that "it was possible to extinguish the fire in the building facilities of the Unit and rescue people who were trapped in the building."

To another question, the spokesman of the Fire Service answered that "every year there is a large-scale exercise, in which all Services, public and private, are involved, which have to do with the management of Larnaca airport. This large-scale exercise is carried out under the supervision and script of the airport management company, Hermes, with the assistance of public and private companies operating in the area of ​​the airport ".