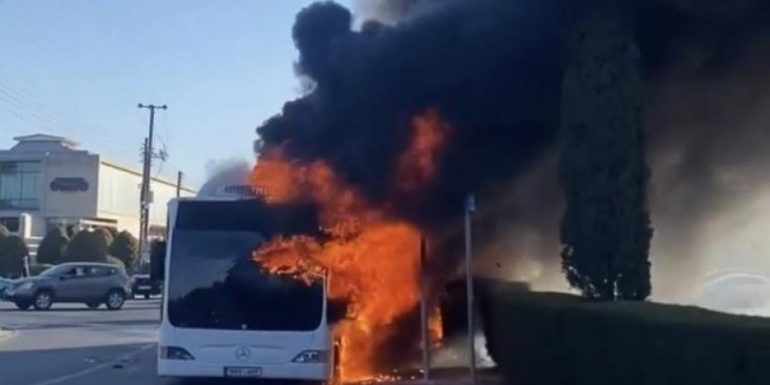 There were no students on the bus, which was completely destroyed in the morning by a fire, outside the Kiti High School, the school principal Loizos Perdikos told KYPE.

He added that "around 06.45 the north side of the school opens, where buses are parked and students are disembarked. The specific bus from Dromolaxia, arrived at the High School shortly before 7 in the morning and the driver, after stopping the vehicle, disembarked the students normally, whom I personally supervised to enter the yard of the building ".

He added that "as soon as the driver started the bus to leave, I realized that there was a problem, because the smoke coming from the back of the vehicle, that is, from the engine, was not normal. "I told the driver that there might be a problem with the bus and after the vehicle traveled about 50 meters, I saw its rear end catch fire."

Answering a relevant question, Mr. Perdikos said that "there was no problem with the students, since I was present when they got off the bus, before the vehicle caught fire. "It is fortunate that the fire did not break out when the 30 or so children were on the bus."

Information from KYPE states that the driver of the bus had mentioned that for a month now there was a problem in the vehicle and it had to be checked.

For his part, the spokesman of the Fire Service Andreas Kettis said that "the bus was completely destroyed. "When a moving vehicle catches fire, we look at three scenarios, whether the problem is mechanical or electrical or there is a fuel leak."

He added that "the bus is also being examined by the Electromechanical Service, however when a vehicle is completely destroyed by fire it is even more difficult to identify the causes".

Besides, the spokesman of the Police, Christos Andreou, stated to KYPE that "it seems that the damage to the bus was mechanical. "We are working with the Electromechanical Service, which will investigate where the fire started," he said, noting that "because the bus was completely destroyed by the fire, it may be more difficult to identify the problem."

Certainly, he continued, "all the necessary steps will be taken to identify this problem."

Meanwhile, on the occasion of the fire that broke out in a bus that transported students to Kiti High School, the Federation of Parents and Guardians of Secondary and Technical Education Schools of Larnaca issued a statement in which it "once again expresses its strong concern about the situation buses and the dangers faced by passengers on a daily basis ".

It adds that "in the recent past both the Larnaca Federation and the Pancyprian Confederation of Parents have expressed concern about problems with the number of buses."

According to the announcement, "the images from the burning bus are shocking. "Today's incident was not another incident and the seriousness of the accident requires the competent authorities to investigate to the end and without delay, the causes of the fire and to examine whether the specific bus had carried out the necessary checks."

The Federation "will wait for the results of the investigations and depending on the findings will return. In any case, the competent authorities have the main responsibility to prevent such accidents from happening again ", the announcement states, noting that" the safety of our students is non-negotiable ".