Changes are coming to the public sector promotion system - 65% graduates 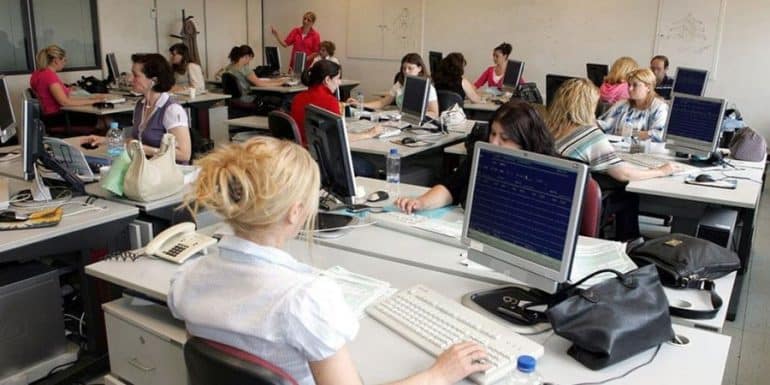 The Public Service Commission has already started preparatory work for the transition to the new promotion system in the public service, which the President of the Public Service Giorgos Papageorgiou characterized as an important step, accompanied by challenges.

As he mentioned in a press conference held for the presentation of the EDY's annual report for 2021, an important step is being taken since, from seniority, qualifications and experience, the system is shifting to the search for the candidate who can now best respond to the needs of a position, with skills as the main criterion.

He also said that it is a major challenge to identify and codify these skills which the civil service will proceed with the amendment of the service plans, which must be completed by January 1, 2024. After the completion of this first leg, he added, it will the second part concerning the correct organization of the assessment centers must be implemented.

He said that a preparatory work has already started for training on the subject and in cooperation with the European Commission a program of 500.000 euros will be financed to meet the filling of the positions with the new procedures. EDY's request for technical support has been approved by the General Directorate for Structural Reform Support (DG REFORM) and the relevant actions are expected to start running in the Autumn of 2022.

At the same time, the President of the EDH referred to the new evaluation system that will exist in the public service, with the aim of escaping from the "equalizing rating" according to which 95% of public servants are all excellent. The rating, he said, will now be numerical and specific criteria will be determined regarding the evaluation of employees.

He added that employees from the A13 scale and above will be evaluated only for development purposes and not for rating purposes, while there will also be the possibility for subordinates to evaluate their superiors, which will not be taken into account for promotion purposes, however may be taken into account by management for purposes of supervisor judgment. At the same time, he noted that there will now be a secondary body to examine the objections submitted in relation to the assessment.

Changes to the promotion system

The main changes envisaged by the new arrangements in relation to the filling of promotional posts include, inter alia, the introduction of a new 'Inter-Departmental Promotion' post category, which, with few exceptions, includes all civil service posts at Grade A13 (ii) the government payroll.

Pre-defined measurable criteria with pre-defined weightings are also provided, depending on the level of each position.

Applicants for the positions of Interdepartmental Promotion (Cl. A13 (ii)) and First Appointment and Promotion (Cl. A14 (ii) and above) are referred to an Examination Center, which is organized or selected, through the tender process, by the EDY.

Seniority, as a criterion, in the positions that were foreseen, is replaced, with the criterion of experience, even in the Promotion Positions.

EDY considers that the new arrangements are modern tools and mechanisms, which are expected to contribute the most to empowering the Commission in the selection of the most suitable candidates, especially in terms of middle management and managerial positions.

The new regulations, with the exception of the new Evaluation System whose implementation starts from 1.1.23, are implemented from 1.1.24.

On July 2, 2021, the President of the Republic proceeded to appoint a new Commission for a six-year term, with Georgios Papageorgiou as President and Antonis Vassiliadis, Vassiliki Anastasiadou, Doro Iliodorou and Costas Koumis as members.

As mentioned at the conference, the Commission, despite the problems created by the pandemic COVID-19 and the restrictive measures implemented, during 2021, it made every possible effort to continue its work, also applying the possibility given to it by law for teleconference meetings.

During 2021, the Committee met in 211 sessions and considered 2.550 items, which is the highest number of items considered since 2017. The majority of the Committee's work (54% of agenda items) was devoted to filling procedures positions.

The Committee accepted 426 candidates in an oral examination to fill First Appointment and First Appointment and Promotion positions, compared to 415 it accepted in 2020. It is noted that the Committee, pursuant to a relevant provision of the Legislation regarding the filling of non-scientific positions, positions whose initial scale does not exceed Scale A7, it also offered appointment to 493 candidates in non-scientific positions without holding an oral examination.

He reviewed 31 procedures for filling positions, following annulment decisions of the Supreme/Administrative Court. In the context of the reviews, 67 persons were selected, of which 47 were persons who were re-promoted/re-appointed to the position they held and which had been cancelled, while 20 persons were selected for the first time for appointment or promotion in the context of the review.

65% of civil servants are graduates

Important decisions of the Supreme Court on EDY

Important decisions concerning the Public Service Commission were issued during 2021 by the Supreme Court in the context of hearing appeals brought before it.

Of these Decisions, the President of EDY characterized the decisions in Appeals 59/2020 and 91/2014 as particularly important.

Specifically with the Decision of the Supreme Court in Revisional Appeal no. 59/2020 issued on June 7, 2021, it was clearly emphasized that the only competent body for recruitment in the public service, in a permanent or temporary position, is the Public Service Commission as an independent constitutional body and no other body of the state.

Also with the Decision dated February 25, 2021 in the Review Appeal no. 91/2014, the Supreme Court, at Plenary level, confirmed the principle that, in positions high in the hierarchy, where "the personality of its holder is an important element, as regards his suitability for the performance of the duties of the position ”, the Committee has wide discretion in selecting the most suitable candidate.