"Blue Kyrenia" is the name of the pseudo-state's new airline

"Meeting with airlines from Russia" 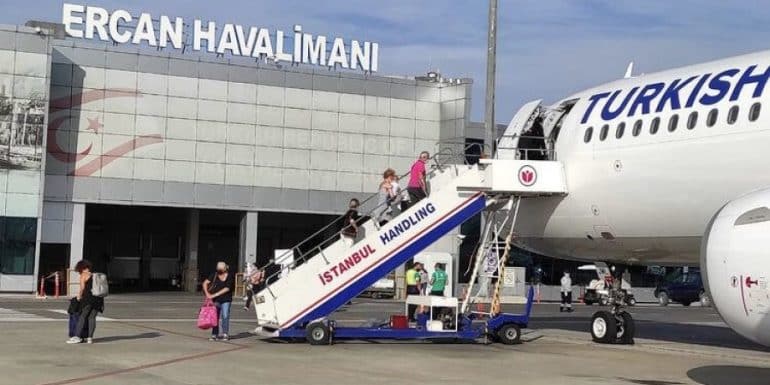 The pseudo-state's so-called "minister" of Public Works and Transport, Erhan Arikli, has stated that test flights will take place at the new illegal Tympo airport on October 29th, and three major flights are scheduled to take place to the airport on November 15th. Arikli even revealed that "The name of the new airline will be 'Mavi Girne Airlines'" (Kyrenia Sea).

"Maybe Mr. President of the Republic of Turkey Recep Tayyip Erdogan will land there, maybe Russian planes will land there on November 15. We have reached the final preparations to establish our own national airline and are waiting for our airline's plane to land on the runway. I hope all three will do it."

Underlining that there is no legal obstacle to the landing of the Russian plane at Tymbu airport, Arikli pointed out that the flight from Moscow can take place.

"Meeting with airlines from Russia"

Stating that previously good relations between "South Cyprus" (as he called the DP) and Russia have deteriorated since the US lifted the arms embargo on the DP, Arikli claimed that the landing of Russian planes in the pseudo-state would contain a politically important message.

Stating that there will be no obstacle to making flights to Ercan Airport with political will, Arikli said that Russian flights will have a significant positive effect on the economy of the so-called "TRNC".

Explaining that they are in talks with two airlines from Russia, Arikli pointed out that next year will be productive in terms of tourism to the pseudo-state, with direct flights from Moscow.

He also drew attention to the high cost of air tickets and said: “Air ticket prices are very expensive. Many citizens living in the TRNC prefer to go from the South (Republic of Cyprus) to Europe. The lack of direct flights increases the cost at this point,” he said.

Arikli said, "Ercan Airport can get the status of Turkey's domestic airlines and there must be political will for it."

Stating that the establishment of the national airline has reached an important stage and is almost complete, Arikli said, “The name of our new airline will be 'Mavi Girne Airlines'. We're trying to make it by November 15th and it can't seem to go wrong. It will start with 5 planes and we aim to grow even more after that.”

Pointing out that in principle there will be flights to Turkey, Arikli said that one of the first flights will take place in Trebizond.

“We have flights to destinations like Adana, Istanbul, Ankara, but there are serious people who live in the Black Sea region in our country and when they want to go to the Black Sea, they waste a lot of time and money. . The airline we will establish will hopefully make one of its first flights to Trabzon. Let me give the good news to the Black Sea expatriates in Cyprus," said Arikli.