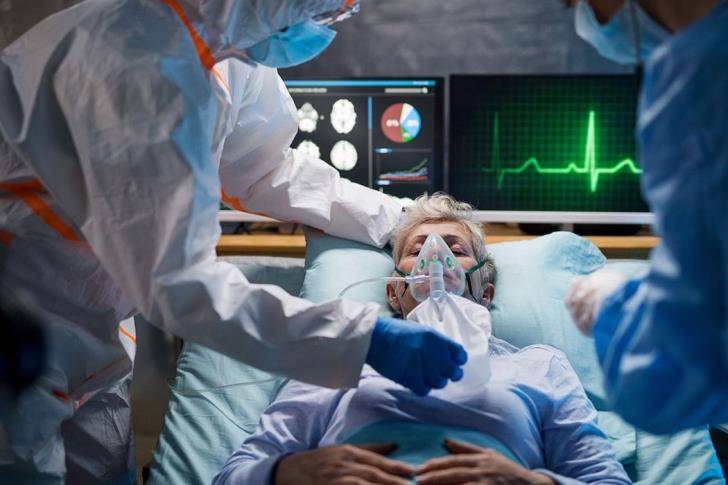 The Intensive Care Units and the Intensive Care Units have been under tremendous pressure for the last twenty-four hours. According to the official data of OKYPY, as they are announced every night by the Ministry of Health, one in two patients with coronavirus is hospitalized in a serious or critical condition with the result that both the ICU and the MAF are already at the limits of their capacity. .

Monday's data were similar when a total of 161 patients were hospitalized, of which 78 were in serious condition and to these numbers must be added daily and double-digit number of intubated post-covid patients. That is, patients who were infected with the coronavirus, needed hospitalization, were admitted to the ICU and were intubated, overcame the coronavirus but still need intensive care since their health condition does not allow their intubation.

Indicative of the situation was yesterday, when 65 patients with coronavirus and 31 intubated post-covid patients were treated in the ICU (capacity of 15 beds). In addition to these 46 patients, another 20 patients with other health problems were hospitalized in the ICU, which means that the Intensive Care Units of the Nicosia Hospital were on the verge of fullness.

"The 1.925 cases detected on Monday, as well as the 2.241 reported on Tuesday, do not allow us to be complacent or rest in the relative stability observed in the total number of patients with coronavirus," OKlapou spokesman Khala told "F" , adding that OKYPY, "is on constant alert but also ready to treat 300 patients in wards and open additional beds in ICU and at the same time a number of nurses and intensivists (Greeks) have been hired who will take office next week we have been strengthened with additional respirators ".

"With the number of cases we have seen in recent days, we can not say with certainty how many cases will be introduced in the next twenty-four hours, but if we follow the models we follow so far, we should definitely expect an increase," he added. He stated that an effort is being made to increase the number of ICU beds with the operation of a fourth unit at the Nicosia hospital and a closed unit for patients with other health problems at the Larnaca hospital. He also noted that "non-Covid and post-Covid patients are already being referred to intensive care units in the private sector in order to decongest the system".

In recent days, added Mr. Charilaou, "there is an increase in the number of pregnant women and midwives who are infected with the coronavirus and need treatment. "As a result, we have to make new arrangements at Makareio Hospital as well."

Mr. Charilaou continued by saying that "the situation can only be worrying. One can not speak for sure, we have to see if it is the Omicron mutation. In the coming days we will see whether the pressure in the hospitals will increase "and he added that" there is a plan in OKYPY to deal with any increased hospitalizations. There is a plan in case of increase of imports, but everyone must realize that the strengths of the system are not unlimited. We monitor the situation, we have done our preparation and we are ready to serve all patients. This does not mean, however, that anyone should be complacent. Vaccination together with strict observance of personal protection measures can prevent the disease and hospitalization or admission to MAF or ICU. That is why we always say that the citizens must be careful in their movements and in their social gatherings and have in mind both their own protection and that of those around them ".

Concern in the National Guard

Sixty-eight cases were detected in two days in National Guard camps, while the total number of active cases at the moment, according to the Ministry of Defense, reaches 145 people.

As the spokesman of the Ministry of Defense, Christos Pieris, stated in his statements, "the problem with the increased cases of the last two days, lies in the return of the Christmas group back to the camps, as they had to present a negative test, which showed the reality". As he characteristically mentioned, while in the previous days 2-3 cases were detected daily, on Monday 32 positive cases were detected, and on Tuesday another 36.

He also said that the national guards who were found positive, declare that they are all asymptomatic, something which, as he said, "is also insidious and for this requires increased vigilance".

Clarify that "There is no thought of postponing the other two groups, that of the New Year and the Epiphany, however everyone must be vigilant during their social activities".

Self tests are not valid for trafficking purposes

The positive result must be confirmed by a second examination

The Ministry of Health had ordered 300.000 self-tests and until yesterday around 200.000 had been made available in pharmacies, said in a statement the coordinator of the population control program of the Ministry of Health, Karolina Stylianou, adding that some pharmacies are not available at the moment. tests to make available to citizens, however, as he said this is something that will be settled. He clarified that "the self test is an additional tool in the hands of vaccinated people and in case of a positive result should be confirmed by a new sampling by a health professional" and stressed that "the result of the self test can not be considered valid for trafficking purposes (SafePass) .

The person who will have a positive result, he said, "should contact his personal doctor or undergo a rapid test in a laboratory and if he is positive and the second examination will follow the procedure that is always followed after updating his surveillance unit. Ministry of Health ".

So far, he said, "there is no data on the number of cases detected by the self-test method and have been confirmed by a second examination."