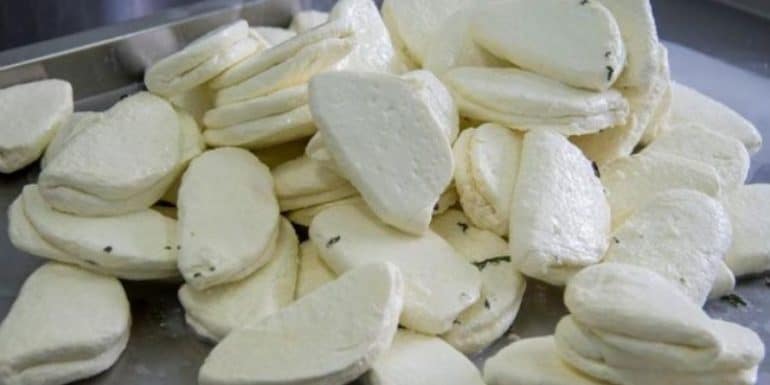 The "Action Plan 2022-2024 for the further strengthening of the extroversion of the Cypriot halloumi industry", was presented during a press conference, to which the Minister of Agriculture, Rural Development and Environment, officials of the KEBE and OEB, as well as representatives of sector. The halloumi.cy website was also officially launched, which was developed by the Ministry of Energy, Trade and Industry with the aim of being one of the tools to inform importers and consumers abroad about halloumi.

As the Minister explained, the process for the preparation and implementation of the Action Plan began two years ago in the context of the Ministry's study on the promotion of the main export products of Cyprus.

"The suggestions we received to strengthen the halloumi brand as a PDO, mainly by creating an integrated campaign with the aim of repositioning it as a premium product and to consolidate it in the field of haute cuisine, led us at the beginning of the year to draw up our communication strategy . An integrated Action Plan which we are presenting today", he said.

As Mrs. Pileidou pointed out, the completion of the Action Plan now creates the conditions for starting the procedures for its implementation, through various means of communication and promotion, such as for example information campaigns through the Ministry's shopping centers located in 14 countries and covering a total of 42 purchases.

In addition, advertisements will be placed in specialized publications and broadcasts, posts will be made on social media, the product will be linked with international culinary personalities, etc.

The aim, as mentioned, is to make better use of the opportunities presented in international trade for halloumi meat and its inclusion in the PDO list of the European Union.

Also increasing the recognition of halloumi as an authentic Cypriot product in new promising target markets, such as the USA, Japan, Australia, Saudi Arabia, the UAE, Qatar, Kuwait and Bahrain, as well as consolidating its presence in existing markets.

In addition, the awareness of consumers abroad regarding the Cypriot origin of the product and the increase in halloumi exports for the benefit of employees, businesses and the Cypriot economy.

The Action Plan also aims to highlight the history of halloumi, its tradition, the family character of Cypriot producers and, of course, its excellent taste and its culinary competitive advantages over other cheeses, including its unique not to melt at high temperatures, which allows it, in addition to raw, to be consumed grilled, grilled or fried.

The halloumi.cy website, which Ms. Pileidou mentioned, is currently available in English, Chinese, Japanese and Arabic languages, in order to address the new markets in which there are great prospects for penetration, is one of the promotion tools halloumi.

The visitor can learn about the history of halloumi, its PDO and trademark protection, its ingredients and nutritional value, how it is consumed and how it can be used as a raw material in cooking, etc. The website it also informs those interested in importing halloumi in their country about their potential partners, as it also includes the Register of Beneficiaries of Use and PDO indication "Halloumi (Halloumi) Hellim", i.e. the list of all the producers who have received approval to produce halloumi.

Today halloumi is exported to more than 50 countries, with the main export markets being the UK, Sweden, Germany, Australia, Austria, Denmark and Poland. These six markets account for 81% of total halloumi exports internationally. It is worth mentioning that from 2016 to 2021 halloumi exports increased by more than 30%.

Mrs. Pileidou said that they are also in open communication with the Ministry of Agriculture, under which the responsibility for the PDO lies, and now everything is included under a single umbrella with coordinated actions, as well as in cooperation with the cheese factories.

He also mentioned that there are also various plans running by the trade service to participate in exhibitions, where there will be an emphasis on the more dynamic presence of halloumi based on the specifications that have been created through this study.

Concerns about competition with possessions

The President of the Cheesegrowers, Giorgos Petrou, speaking at the conference, expressed concern about the domestic competition that may arise from the Turkish Cypriots, since as he said they will import their animal feed from Turkey, something that is prohibited in the EU, they will produce milk at a low cost, the cheese farms will buy milk at a low cost and compete with other farmers and cheese makers.

Ms. Pileidou said that this concerned the relevant Ministries not only in relation to halloumi but also with various products and raw materials produced in Cyprus, which may be imported illegally or even come to the free zones illegally. As he mentioned, measures are being taken to better deal with the problems, while he noted that the independent Bureau Veritas will carry out the same checks in the occupied areas as in the free areas, so any irregularities will be detected.

The Minister of Agriculture, Kostas Kadis, said that the concerns expressed are reasonable, but he assured that the control process will be very strict and that whatever procedures the E/K cheesemakers have to meet, the T/K cheesemakers and they will be controlled in exactly the same way, from receiving the feed and feeding the animals to the production of the product in the cheese factories.

He noted that Bureau Veritas is a global organization and there is no questioning how well it will do its job, while expressing the opinion that there is nothing to fear through this process.

"Besides, I believe that there is a huge scope for further promotion of the product and they fit in this effort, I believe everyone", said Mr. Kadis.

He added that they are following very closely what is happening in the occupied territories and in consultation with the European Commission if there is any distortion they will intervene immediately to correct it.

At the same time, answering another question, Mrs. Pileidou said that there has been interest in the shopping centers of Cyprus abroad for halloumi from various representatives of supermarkets and other citizens who are interested in halloumi since it has obtained this registration.

The Director of Industry of the KEBE, Andreas Andreou, said that the action plan is extremely important because it targets all the actions of all the agencies involved so that there is a structured way of developing and promoting the product.

Ms. Pileidou finally mentioned that the Ministry is proceeding with two axes. One, as he said, is the current one and the other concerns the idea of ​​made in Cyprus which will include various products that will be part of this initiative.