Karagiannis: It is only a matter of time before the virus weakens

"I'm cautious, but I'm not particularly worried at the moment" 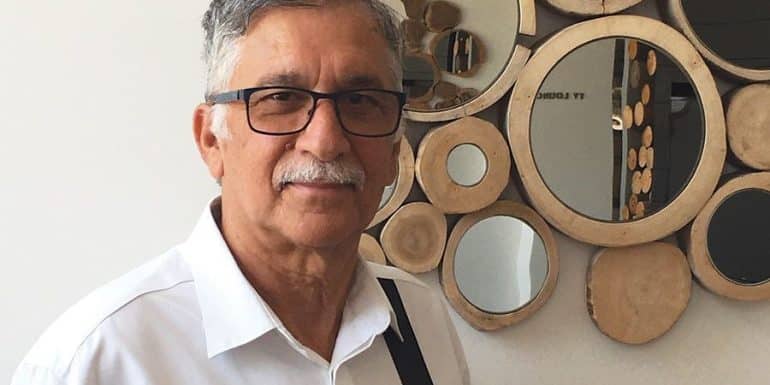 It is only a matter of time before the virus weakens, the Professor of Microbiology/Molecular Virology of the School of Medicine of the University of Nicosia, Dr. Petros Karagiannis, told KYPE. like the previous ones.

Dr. Karagiannis, who is also a member of the Scientific Advisory Committee of the Ministry of Health, explains to the Cyprus News Agency the new data resulting from the detection of the three new substrains BQ.1, BQ1.1 and XBB and analyzes how alarming the news is data.

In relation to the three new sub-executives, although he is cautious, he notes that he is not particularly worried at the moment.

He expresses the belief that Cyprus will face re-infections, which will occur due to their partial escape from immunity, to note that a possible new wave that will occur will not suffer particularly, like the previous ones.

When asked if there is a possibility that the three new substrains BQ.1, BQ1.1 and XBB can bypass the immune protection of the Cypriot population, Dr. Karagiannis explains that "BQ.1 and BQ1.1 are offshoots of Omicron 5, the which is currently the dominant body in Cyprus".

He also points out that several of the Cypriot population, at least during the last summer wave, have been infected with Omicron 4 and 5, so, as he explains, "there is some natural immunity".

In addition, he notes that the updated vaccines offer protection against Omicron 4 and 5 and therefore "could induce immunity."

With reference to substrains BQ.1 and BQ1.1, he considers that there is partial immunity in the population, which will moderate their effect, to note that he estimates that their possible registration in the population does not expect that it will lead to a significant increase in hospitalizations .

However, he notes that this will be ascertained as more data is collected.

"Right now in the countries where they are being trafficked, it seems that those particular subvariants are trying to dominate Omicron 5. So they have an advantage right now to be trafficked, and that might be because of the partial escape," he notes.

Regarding the XBB substrain, it states that it is a branch of Omicron 2 and was first presented in Singapore, while so far it has been detected in 17 other European and Asian countries.

Dr. Karagiannis explains that "this sub-variant also has an advantage from the point of view of hyper-transmissibility, because within a week in Singapore it led to a 50% increase in cases", however, he adds that so far nothing has been heard about an increase in hospitalizations .

"I'm cautious, but I'm not particularly worried at the moment," he says.

When asked if it is possible to predict how likely another wave of re-infection is, he says that he thinks "re-infections will happen, because they have this partial escape from immunity", while noting that "we may see a wave, which however, it won't bother us much, like the previous waves."

"The concern lies in the fact that at the moment in the laboratory these variants - and especially ChBB - completely escape the monoclonal antibodies. Monoclonal antibodies bind only a part of the viral spike protein. So if there's a mutation at that point, they can't stick anymore. While polyclonal antibodies can stick to different places. Therefore, they are more efficient. That's why I'm more optimistic, because monoclonal antibodies are like a bullet that hits a certain point and can't hit too far," he says.

Asked to state when the virus will stop mutating, Dr. Karagiannis replies that in Cyprus for the last five weeks there has been a stagnation in infections and this is due to the fact that there are no longer any people in the population who do not have any immunity, so that can the virus be transmitted.

He further explains that the virus, in an attempt to perpetuate its species, mutates so that it escapes immunity and finds a fertile ground in the population, to add that currently 25% of recorded infections are re-infections.

According to Dr. Karagiannis, "we will be quiet from the virus, when from the many mutations that it will bring to itself, it will no longer find ground to circulate or the new mutations will not be so profitable for it."

"It is a matter of time before the virus weakens and disappears," he notes.

For the 4th and 5th booster doses of vaccine, he says that according to studies done on people who were vaccinated, "they seem to stimulate immunity and cause a 60% increase in neutralizing antibodies against Omicron 4 and 5," to add that scientists hope that this increase in antibodies will also suppress the new strains to a large extent.

Asked to comment on the low attendance rate for the administration of the 4th and 5th dose of the vaccine, Mr. Karagiannis emphasizes that "the virus will not stop surprising us".

"Already where things had calmed down, these three new sub-executives are presented. If we don't want them to bother us, we should prepare properly. And the only way is vaccination, as ECDC announced," he concludes.