Karousos / Perdios: "Need for quality tourism" - "The tourist to experience the Cypriot experience"

What did they say while speaking at the conference organized by the Association of Tourism Enterprises of Cyprus (STEK) on the topic "Tourism: The Next Day". 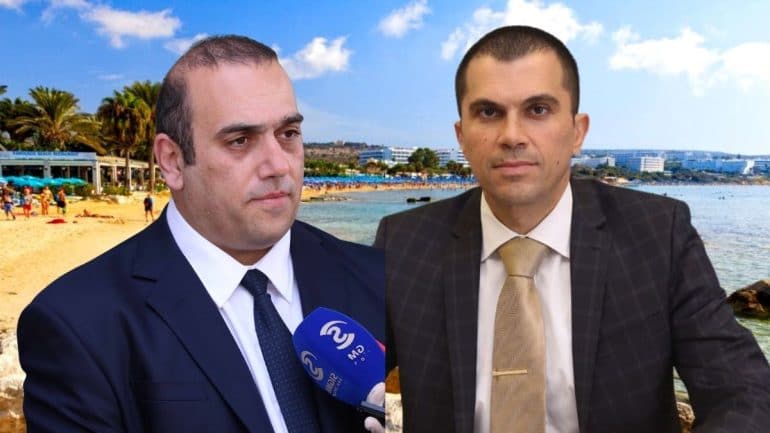 Both the Minister of Transport, Communications and Works Giannis Karousos and the Deputy Minister of Tourism Savvas Perdios stressed the need to attract quality tourism that can be resistant to ongoing crises but also the need for the tourist to experience the Cypriot experience during his trip to Cyprus. speaking at a conference organized on Tuesday by the Cyprus Tourism Association (STEK) on "Tourism: The Next Day".

Specifically, Mr. Karousos said that quality tourism comes through the integrated tourist experience, while emphasizing that "without air connectivity we will not see quality visitors".

The Minister of Transport said that in order to achieve this goal "we must create such a tourist resort so that visitors have such unique experiences and memories, so that when they return home they can take some Cyprus with them, some of the tourist resort that they have visited, so that we have repeat visitors ".

"For me, quality tourism is the kind of tourist and the kind of product that we will prepare and it will result in three things: The first is that we will create a destination that will be enjoyed by visitors, the second is that businesses will prosper. and the third is that the residents will be proud of their resort ", he underlined.

Referring to the air connectivity of Cyprus, Mr. Karousos said that a remarkable effort is being made in cooperation with the Ministry of Tourism, Hermes and several others and "we managed in the midst of crisis and in the midst of a pandemic to have more destinations available, more options in relation with 2019 ".

He added that in 2021 we had 158 destinations, while in 2019, which was the best tourist and passenger season, we had 150 and more or less the same airlines.

Stating that the Deputy Minister of Tourism insisted that we should open France and persuade airlines to include it in their destinations, Mr. Karousos said that "for several years there were no direct flights and now we have flights to almost all airports in Paris , in Toulouse, in Lyon, in Strasbourg and more will come ".

In addition, the Minister of Transport said that with the initiative of Cyprus for the Declaration on Air Connectivity and its adoption by 13 other EU Member States, "we ask the European Commission to submit a specific plan for support and recovery of aviation, but also to give us the tools - because now with state aid there are enough problems - to support air connectivity ".

"One of the aims of the Declaration, apart from the tools and the pressure on the European Commission to support aviation, is to provide a definition of what minimum air connectivity means," he said.

For his part, Deputy Minister of Tourism Savvas Perdios said that every year there is a new crisis in tourism and stressed that the Ministry's effort is "to make tourism more resilient than before, so that these crises that will continue to come every year to be able to deal with them ".

The Undersecretary then referred to the two aspects of tourism quality and said that the first concerns quality at the destination level and the second the private sector.

Regarding the quality in terms of tourism, Mr. Perdios said that at the State Department "despite the crisis of the pandemic we tried to make some products that can give a new identity to Cyprus" and added that "we must leave the quality marks to they can put in the visitor's mind what Cyprus means ".

Referring to 12 examples that the Ministry of State has worked on in the last two years, Mr. Perdios said that the first concerns the theme parks of Cyprus and stressed that "the goal is to certify many theme parks so that their level can rise in general. ».

He said that the second signal concerns the beaches and added that Cyprus has 75 beaches with a blue flag but the most important, as he said, is that Cyprus has the cleanest waters in Europe "with a percentage of 100% purity, according to the European Agency Environment.

He then referred to the Cypriot gastronomy and said, among other things, that it is not enough to say that Cyprus has good food and added that it is different to refer to a Cypriot breakfast with which "an identity automatically enters the mind of the visitor".

Mr. Perdios also referred to the need to create "Vegan Friendly" hotels and restaurants, noting that 150 companies in Cyprus have joined this brand.

He also mentioned, among other things, the need to promote Cypriot wines, but also the need to highlight the Cypriot nature and the Cypriot villages that will be given the opportunity to stand out globally.

"Cyprus differs not in the existence of these experiences but in the fact that one can find them by traveling very short distances," he stressed.

Speaking at the conference, the President of the Hellenic Tourism Organization (EOT) Angela Gerekou said that Cyprus could be a "success story" for the next day.

He spoke in support of the US Alliance, but said that maintaining some independence was not the answer to the crisis. how resilient it becomes each time to manage these crises ".

Ms. Gerekou said that she firmly believes that the only solution to these crises is quality tourism and added that in order to achieve this goal "the reason must be given to the modern traveler".

"Almost 50% of travelers are much more important than in the pre-pandemic period," he said, adding that "travelers' desire to get their lives back is so strong that at the moment it shows that it is quite difficult to stop." despite the war in Ukraine and the crisis ".

He also stated that "sustainable businesses and environmentally friendly policies are a constant issue" and stressed that "the feeling of a local traveler is the most important experience that will take with him a part of our country."

Finally, the President of STEK, Akis Vavlitis, referred to the continuous crises since 2001 and to data on tourism, adding that "our excessive dependence on one or two countries must be seriously reduced".

"Almost all other Mediterranean tourist countries are not more than 20% dependent on one country," he added.

Also, Mr. Vavlitis said that since its establishment, STEK said that "quality tourism is the only way for a prosperous hotel industry and a prosperous economy".

Regarding data on tourism revenues, Mr. Vavlitis said that in 2019, while arrivals were higher by 1,28 million compared to 2001, "we had € 140 million less", adding that he clearly shows us that we should to turn to better tourism ".