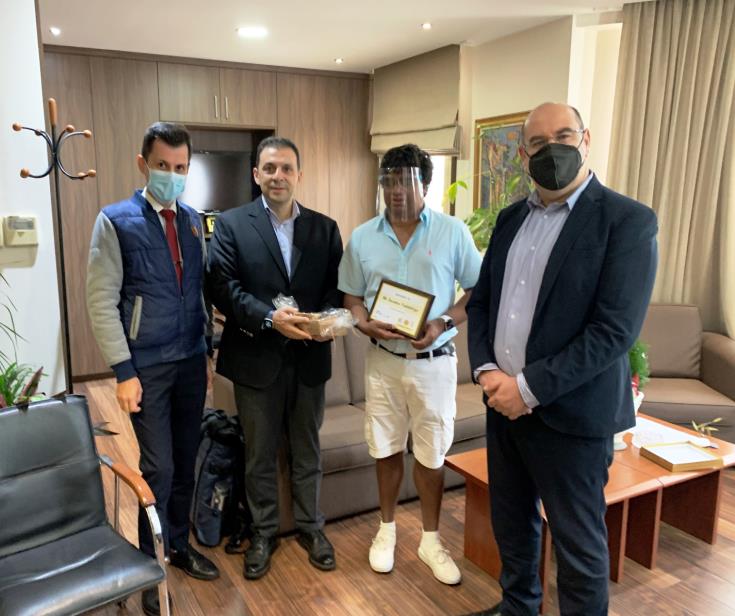 Larnaca honored a British tourist who stays in a city hotel for 400 consecutive days.

A written notice states that "The Municipality of Larnaca and the Larnaca Tourism Development and Promotion Company (ETAP) honored the city's loyal friend from the United Kingdom Seneka Yaddehige, for his devotion and preference for the city of Zenon."

It is added that Mr. Yaddehige is not an ordinary recurring tourist "like 60% of Larnaca district visitors who leave to return, simply because he has not left his hotel since October 2020." The Briton is essentially a tourist, who has been staying in a suite of the Radisson Blu Hotel in Larnaca for 400 consecutive days, while the day of his departure is still unknown ".

Andreas Vyras, Mayor of Larnaca and Vice President of ETAP Larnaca Presented Mr. Yaddehige with an honorary plaque, declaring him "Larnaka's Loyal Friend", thanking him for his dedication. It is an honor for Larnaca the stable choice of destination by foreign visitors " said the Mayor.

For his part, Marios Polyviou, member of the Board of Directors of ETAP Larnaca and CEO of the hotel where the British tourist is staying, said that "Mr Yaddehige is the longest-serving tenant of the Radisson Blu Hotel to date and it is important that he chose to stay in Larnaca for so long. The quality services of the hotel but also Larnaca itself as a multidimensional destination have contributed to the stay, this person, for so long ".

In this context, said Mr. Polyviou "It is imperative the collective need to maintain and increase the already high percentage of repeat tourists in Larnaca".

According to the announcement, Mr. Yaddehige stated that "While he travels frequently around the world for both business and leisure, this is the first time he has been to a destination for such a long time."

He added that "He traveled to Larnaca for the first time in October last year and since then he has stayed, since, as he said, he feels comfortable both in the hotel and in the city. He also said that the main factors that push him to want to stay longer in Larnaca, are the friendly residents of the city and the general culture of the destination.

It is noted that the Larnaca Tourism Development and Promotion Company has established for years the institution "Larnaka's Loyal Friends" in collaboration with local authorities and hotels in the area, not only as a token of appreciation to its regular tourists, but also for the fact that its tourism campaign focuses on its advantage of having the highest percentage of repeat tourists ".