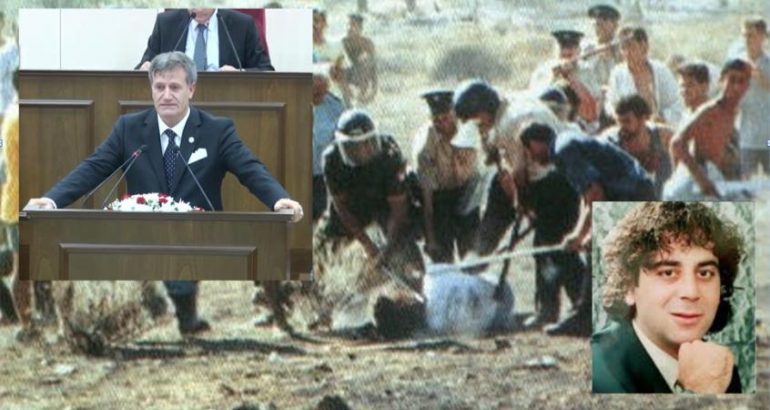 Another black page in the stores of this place was written yesterday, against the background of the illegal swearing in of the newly elected "deputies" in the occupied territories, including one of the wanted for the murder of Tassos Isaac in the green line in the summer of 1996.

The then president of the Turk-Bir student organization, Erhan Erikli, was among the mob that beat Greek Cypriot Tassos Isaac to death, leaving his wife widowed and his then-unborn daughter orphaned. The extremist elements of the gray wolves, as well as members of the fascist organization represented by Erhan Arikli, were trapped under globes, sticks, stones and whatever other deadly weapon they were holding in their hands, Isaac, and they brutally beat him. death.

The assassination of Isaac, as well as that of Solomos Solomos that followed, resulted in the issuance of a total of 11 arrest warrants, including that of Arikli, who as of today officially took office in the "parliament" of the illegal formation of the pseudo-state, representing me "Democratic dress" the voice of the settlers in the occupied territories, since in addition to "MP" he is also president of the party of settlers "Renaissance".

Here is the speech during the "swearing in" of Erhan Arikli

Arikli was arrested 6 years ago in Kyrgyzstan, from which Cyprus immediately requested his extradition, but this was not accepted - apparently after Turkish intervention - and not only that, but after a while he was released and returned to occupied.

The incendiary presence of Arikli in the "parliament" of the occupiers, was immediately perceived, even today, on the day of the "swearing in" ceremony of the new "deputies". With the atmosphere already electrified by the settlers' attack on the offices of the previous newspaper Africa, the activist, anti-fascist, "MP" Dogus Derya, when she took the stage to swear in, ended her speech with a slogan against fascism, the same while supporters of Arikli had gathered at the gallery and disapproved of her. In fact, just as she was coming down from the podium, the "MP" partner of the settlers' party, Bertan Zaroğlu, threw a piece of rubbish in her face.

The video with the attack on Derya

After all, the latest publication in Africa (which spoke of a new Turkish invasion of Syria, similar to the one in Cyprus in 1974), angered the Gray Wolves terrorist organization, which issued a statement strongly condemning him.