The data so far for the budget 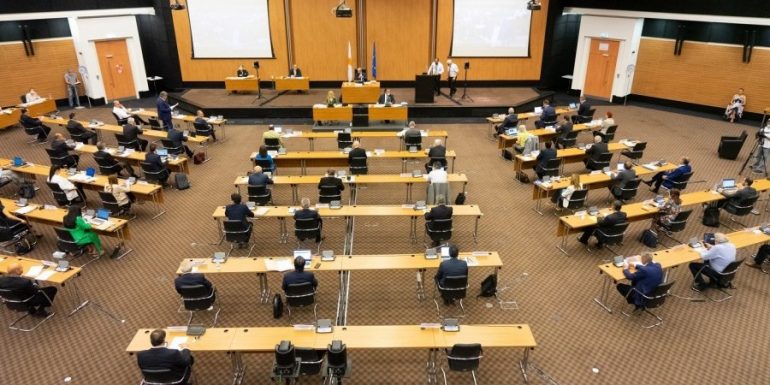 The discussion of the State Budget of 14.00 continues at 2021 in the Plenary Session of the Parliament, which will be completed when the top law of the state is put to a vote. This year, with the decision of DIKO to vote against the Budget, it seems that there is a possibility that the Budget will be voted against, a possibility that monopolized the debate before the Plenary Session.

Following the vote on the Budget and the conclusion of the session, the Plenary Session of the Parliament will convene in a new session, the agenda of which includes a draft decision for the approval of the twelfth for January in case the Budget is voted against.

The discussion will begin with the speech of the independent MP Anna Theologos who in recent years has been voting against the Budget, will continue with the speeches of Angelos Votsis, the Cooperation of Democratic Forces, the Member of Parliament for ELAM, Linos Papagiannis, the Member of Parliament for EDEK, of the Vice President of DIKO, Christiana Erotokritou, of the Parliamentary Representative of AKEL, George Loukaidis and will end with the speech of the Parliamentary Representative of DISY, Nikos Tornaritis.

The amendments tabled by the parties for cuts or commitments of funds for voting or voting will be presented to the Plenary. This is a procedure that will prove to be unnecessary if the Budget is voted against, which, based on the procedure followed, is put to the vote after the vote on the amendments has been completed. It is not ruled out that if the vote becomes certain, one of the parties will ask that the amendments not be put to a vote.

DISY and ELAM stated that they vote for the Budget. Apart from DIKO and AKEL, the Movement of Ecologists - Citizens' Cooperation also decided to vote against the Budget. EDEK MP Kostis Efstathiou in his speech during the discussion of the Budget yesterday Wednesday stated that the Budget cannot be accepted, without making it clear whether he was expressing a personal or party position. Before the resumption of the debate, the Solidarity Movement will decide on the position on the Budget.

The position to be held by the two MPs of the Co-operation of Democratic Forces and the MP of the Citizens' Alliance is also pending.

It is noted that the President of DIKO, Nikolas Papadopoulos and the Member of Parliament for the Cooperation of Democratic Forces, Marinos Mousiouttas will be absent from the session and the voting due to self-restraint. It remains unknown whether AKEL MP Nikos Kettiros will be able to attend the session.

When the vote on the Budget is completed, the Plenary Session of the Parliament will convene in a new session, of legislative content. The agenda states that the meeting will start at 18:00. The legislature will be called upon to decide whether to accept the referral of the Law on Combating Internet Sexism against Women through Criminal Law and the five bills on real estate sales. Also, the Plenary with a draft decision that will vote, approve or reject the twelfth of January in case of a vote against the Budget. The final outcome of the bills will depend on the decision that the Association of Banks is expected to make in relation to the issues that the bills aim to regulate.