Perdios: "Tourist arrivals at last year's levels, if not better"

What are the plans to support the tourism industry 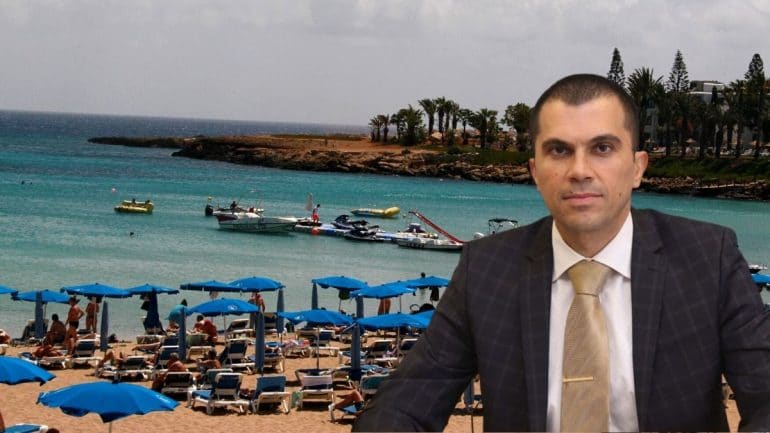 Arrivals that will reach the numbers of last summer season and may even exceed them, Cyprus expects this year, according to the Deputy Minister of Tourism, Savva Perdio. He stated this today in his statements after a meeting with the Secretary General. AKEL Secretary, Stefanos Stefanou, who handed him a memorandum of proposals to support the tourism industry.

During the meeting, which took place at the AKEL Offices, media were discussed in order for the tourism industry of Cyprus to cope with the crisis caused by the war in Ukraine, as this entails a loss of 800.000 arrivals from Russia and Ukraine for this year.

According to Mr. Perdio, preparations for this eventuality had been made since the end of January, ie before the Russian invasion of Ukraine, in order to compensate for the possible blow. "We are trying to cover about 200.000 - 250.000 arrivals from other markets," said the Deputy Minister of Tourism, who clarified that even so the loss of 800.000 arrivals can not be covered.

"The goal of having at least one year at the same level as last year remains achievable," said Mr Perdios, explaining that last year's performance was one of the best in Europe and the Eastern Mediterranean, even if markets like England Israel and the Nordic countries did not move as much as expected. "These markets will move this year and that is where our optimism comes from that we will catch last year's numbers, if not something better, even though the reduction from Russia and Ukraine is huge and will not be fully offset." he said.

He stressed that AKEL's contribution is important with suggestions that, as he said, the State Ministry accepts "with an open mind and enthusiasm." He also said that several proposals have been adopted by AKEL in the tourism sector in the past years, while this is the third time that the opposition party has made proposals for the upgrading of the tourism industry.

"I am sure that this time too the suggestions are very good and in the right direction", said Mr. Perdios and added that for weeks the State Ministry has been working for the implementation of some of what has been suggested by AKEL.

Plan for subsidized holidays for residents of Cyprus for May - July

Regarding domestic tourism, which is also included in the memorandum submitted by AKEL, the Undersecretary said that they have already started preparing a package that will be submitted to the Council of Ministers next Wednesday.

"A program of subsidized vacations for the permanent residents of Cyprus has been prepared for this year as well, which will start in May and will be valid until the end of July, for all areas of Cyprus," the Undersecretary said.

In closing, he thanked Mr. Stefanou for the cooperation and pointed out that the importance that AKEL gives to the tourism sector is seen in practice. "We are managing the crises, but at the same time we are implementing the national strategy in tourism, which is very important because we want to deliver Cyprus improved compared to what we knew before the State Department started its actions," he concluded.

As stated by G.G. of AKEL, Stefanos Stefanou, after the meeting with the Deputy Minister of Tourism, the proposals for the strengthening of the tourism industry are articulated in four axes. As he said, after provincial meetings with stakeholders and stakeholders of the tourism industry of Cyprus, a memorandum was drafted, proposing moves to ensure practical European solidarity to Cyprus, due to the tourism crisis for the third consecutive year, efforts to find new to strengthen the existing ones, measures to strengthen and promote domestic tourism, as well as support plans for businesses and employees in the sector.

In particular, he stressed that tourism in Cyprus "is also affected by the fact that decisions have been taken on sanctions, which also objectively affects Cyprus" and therefore "we should ask the Europeans to help us in order to be able to face the difficulties ". Mr. Stefanou also stressed the need to find new markets for the country's tourism industry, both in the short and medium term.

Regarding domestic tourism, he said that "based on the experience we have from previous years and especially from last year when domestic tourism helped a lot in relation to the problems caused by the pandemic and the various lockdowns, it can now to give important solutions and important breaths to the tourism industry ". In this regard, the memorandum submitted to the Deputy Minister, proposes expansion, strengthening and promotion of the existing plan for domestic tourism for holidays of two nights or more, with a proposal to increase the amount covered per night to 80-100 euros.

It is also suggested that agritourism accommodation be encouraged to participate, so that not only coastal areas benefit. It is also proposed to reopen the program "Small getaways - great experiences" for excursions with guided tours on weekends, as well as the program "Learning Cyprus", with a series of 7-8 routes, and the program "Meet our nature", with nature trails.

In addition, AKEL proposes the strengthening of Social Tourism Plans, as well as to formulate targeted plans (based on socio-economic criteria) for employees and special groups of the population that are not covered by the Central Permit Fund (low-income retirees, people with disabilities).

Mr. Stefanou also made special reference to the need for support of workers and companies, since, as he said, "after the two years of pandemic and the third year with the difficult situation created by the war, it should be studied in order to we see how we support employees and companies so that they can cope with the difficulties ".

As Mr. Stefanou explained, AKEL's proposals emerged after meetings with stakeholders and actors in the tourism industry, in the provinces of Paphos, Limassol, Larnaca and the Famagusta free area, in order to contribute to finding solutions to this difficult situation. the place passes.