Perdios: "Tourism is not just hotels and restaurants…"

The messages of Yf. Tourism from the podium of "Cyprus Tourism Awards 2021" 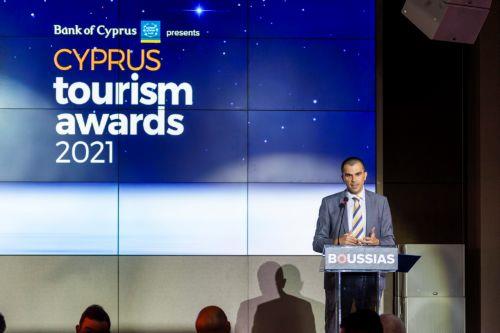 The Deputy Minister of Tourism, Savvas Perdios, expressed his confidence that this year's tourist year will be better than 2021, speaking during the "Cyprus Tourism Awards 2021" ceremony, which took place last night at the Four Seasons Hotel in Limassol.

The awards for Cypriot tourism were organized for the 3rd consecutive year by BOUSSIAS Cyprus and presented by the Bank of Cyprus.

Mr. Perdios stressed that "no matter how many adversities there are, we build resilience and prove that we are for the difficult".

The importance of awards

The Deputy Minister of Tourism expressed his joy that the institution of awards is growing year by year.

"It is a given that the award or reward is very important, not only in tourism, but in the human factor in general. The most important thing for us is that we see the category of companies being constantly added and this shows the pluralism of the companies that exist in Cyprus and are active in tourism ".

The winners, he stressed, "show us all that, no matter what happens, tourism will always find a way to stand on its own two feet and whatever the adversities, I believe that year after year we build resilience and prove that we are for the difficult ".

At the same time, Savvas Perdios stated that tourism is not only hotels and restaurants, it is also the camps, glamping (luxury camps), it is also the Authentic Experiences, which we are preparing now and it makes me very happy, because we show, everyone together, those of us who deal with tourism, that tourism is not just what we knew in the past ".

Especially these days, he noted, it is very important that the world of tourism, to feel this recognition "and the Ministry of Tourism will continue to support such institutions, especially institutions that are consistent or try to make moves that bring out everything what the State Department is trying to set up at the product level ".

"Every year there is a crisis"

Savvas Perdios pointed out that every year tourism has to face a crisis and "it is something that has put us on alert and we have worked very hard on the product of Cyprus, we have added many new products, whether they are products of nature, adventure travel , wine-gastronomy, we gave importance to our villages with the certifications for colored villages and Christmas villages ", while he also reminded the" Heartland of Legends, a very important route of 3.000 kilometers, full of authentic experiences ".

"Solutions will be found this year as well…"

Asked about this, he said that the world of tourism may be worried about the developments of the pandemic and the Russian invasion of Ukraine, however, as he said, there is widespread optimism that Cyprus has started either entering new markets or to be established in markets that we had, but did not give the necessary importance in the last decade.

"Out of nowhere, this year we have 40 flights a week to and from Germany, 20 flights to and from France, while we had zero two years ago. "The Scandinavian market will go even better from 2019, as will Switzerland, Austria, and even Poland, which is adjacent to the war zone."

Expressing the belief that Cyprus will find the solutions that will give breath to tourism this year as well, the Undersecretary underlined that the messages he has received from the marathon of his contacts in the last 8 months, are that all markets will go better by 2021. , with the exception of Russia and Ukraine.

Asked about the role of domestic tourism, Mr. Perdios reminded that a few days ago the program of the first phase of subsidized summer vacations for the period May-July was announced and noted that in the coming days the accommodation that will be included in the Plan is expected to be announced. .