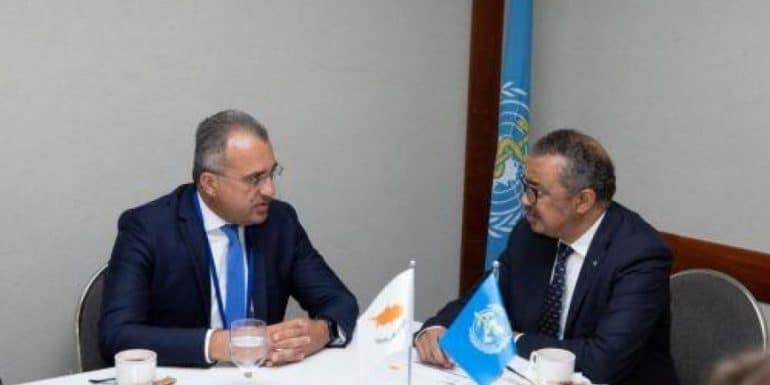 Consultations and work are progressing normally, so that the Regional Office of the World Health Organization in Cyprus can be put into operation as soon as possible, the Communication Adviser to the Minister of Health, Konstantinos Athanasiou, told KYPE, noting that as of yesterday, Sunday, three are in Cyprus Agency officials for consultations.

According to Constantinos Athanasiou, the agreement is expected to be signed within January, in the presence of the WHO Regional Director for Europe, Hans Kluge, who will come to Cyprus for the signing ceremony.

As Mr. Athanasiou noted, the three WHO officials will today visit the place where the Organization's Office in Larnaca will be housed, while they will meet with officials of the Municipality of Larnaca and the Ministry of Health.

Besides, he added that tomorrow, Tuesday, they will sit in on a meeting with the Minister of Health, Michalis Hatzipantela, and with the General Director of the Ministry of Health. Dr. Christina Giannaki, during which the process so far and the consultations that have taken place will be evaluated.

"There are some technical issues to sort out, however, everything is going well," said Mr. Athanasiou.

The WHO Office will be located exclusively in Cyprus and will cover the countries of the Mediterranean basin and Southeast Europe, while it will be made up of Cypriot experts, as well as an external expert from the Organization.

It is noted that the WHO Regional Office for Europe in Cyprus will be active in strengthening public health and upgrading preparedness to deal with emerging and epidemic-prone infectious diseases, through the promotion of innovative actions aimed at their prevention, as well as in the collection , dissemination and evaluation of epidemiological data.

It will also be active in the development of policies in the field of Communicable Diseases and Zoonoses and in networking and creating alliances between the countries of the Mediterranean Basin and South-Eastern Europe and engaging the countries concerned through targeted actions.