Shocking testimonies of blind people: "Darkness and loneliness surround us"

Thousands of people are in the dark 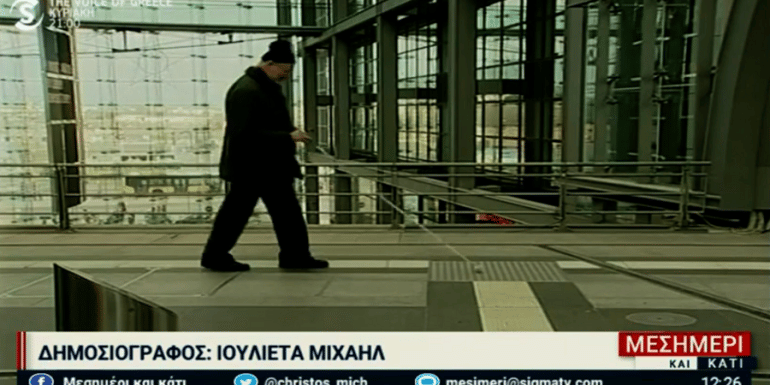 The obvious are not obvious to everyone. Thousands of people are in the dark. The life of a blind person is a difficult life, full of obstacles, limitations and loneliness.

Sigma's "Noon and Something" show went to the shelters of the School for the Blind, talked to people who lost their sight and tried to understand a little of how they live and feel.

People who were born blind, people who along the way lost their sight in a shocking confession told us that they are surrounded by darkness and loneliness.

The stories of three people

Michalis Mouroutis, Vice President of the Association of the Blind lost his sight just seven years ago. Since then his life is very different and his path lonely, as he also lost his wife.

Maroula Hatzipolykarpou was born blind and never saw the light of day. However, she never gave up and through her difficulty gave birth to enviable works since she is engaged in the manufacture of handicrafts.

Andreas Fotiadis went blind when he was 20 years old after a rare condition that affected his vision and brain. "It was a shocking event, everything changes in life", Mr. Fotiadis confesses to us.

Traffic of the blind is difficult and dangerous

Inadequacies in the road network make the movement of the blind difficult and dangerous.

"Shall the blind walk? Where to walk? With the cars that are on the sidewalks? The trees you go and knock over?", asked Michalis Mouroutis.

For her part, Maroula Hatzipolykarpou said that "one has to live a situation to be able to understand it. When you don't experience something, it's very difficult to understand."

Their request is the preservation of the School for the Blind

Their request is the preservation of the School for the Blind but also the expansion of the institution to other Provinces.

"Unfortunately, there is a school in Nicosia. Although there are facilities for those from Paphos. Whatever you facilitate, is it right to exist here in Nicosia? Is it the same for someone from Strovolos to come from Paginia or from Paphos?", noted Mr. Mouroutis.

As Antoine d'Saint Exupery said, “only with the heart do you see well. The eyes cannot see the essence". The blind learned to see with the eyes of the soul and to make their difficulty an advantage.