Ministry of Foreign Affairs: The decisions for the 8.000 Ukrainians who are in Cyprus

"Absolutely no Ukrainian who is in Cyprus today, and needs help, will wait" 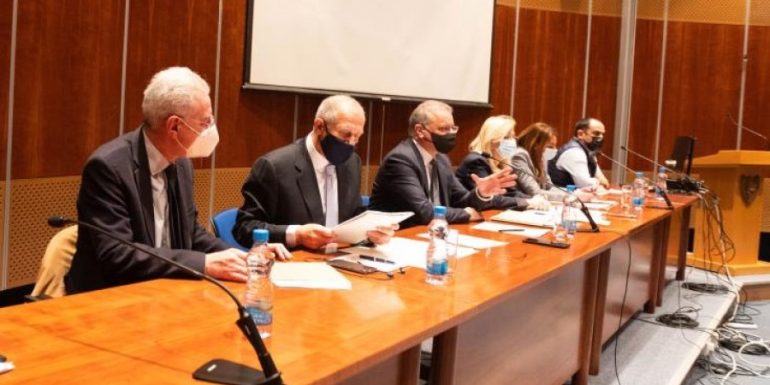 "Absolutely no Ukrainian who is in Cyprus today, and needs help, will wait," said Interior Minister Nikos Nouris, adding that the Republic of Cyprus reacts immediately to provide any assistance requested, whether housing, food or any other assistance. .

According to the Minister, during an inter-ministerial and inter-service meeting held at the Ministry of Finance, specific issues related to the need for harmonization of Cyprus with the European directive on the management of Ukrainian refugees who arrived in the Member States after 24 February were discussed. "The first concerns the registration procedures of Ukrainians in our country, in order to grant them international protection, the second concerns the issues of housing and social protection, the third concerns access to work, access to medical care and the issue of education." reported.

As the Minister of Interior noted, there was a conclusion and a decision regarding a specific procedure for the Ukrainians who have arrived in the Republic after February 24 "who today number 6.024, while another 2.300 are already in Cyprus either as tourists or for some other reasons and obviously have been trapped. "So we are talking about a number that today numbers around 8.000 in the Republic, for which we will submit specific proposals to the next Council of Ministers for the management of these people", noted Mr. Nouris.

The Minister stated that there will be announcements by electronic posting on the website of the Ministry of Interior and the Asylum Service in which the specific Ukrainians will be able to register, "who will receive electronic approval from the Ministry of Interior for the specific permit and from there and then they will have to go to the provincial levels of the Aliens and Immigration Service to obtain biometric data in order to be issued a plastic card, which will last up to 12 months, until March 2023, and which will grant them all the rights. this card and in matters of health care and in matters of work and in matters of allowance or housing policy ".

Regarding housing, Mr. Nouris said that "the Ministry of Tourism has already booked around 3.000 rooms to be able to welcome these people. There will be coordination with the competent Ministry of Welfare to be directed according to the physiognomy of the family in these accommodations and of course the Ministry of Welfare will announce the way of the benefit policy which it will submit for approval to the next Council of Ministers ".

Regarding the right to work, the Minister stated that "it remains and is given to everyone without exception, with the presentation of this card. Every employer will be able to declare their intention on a specific platform of the Ministry of Labor if they wish and in which professions they wish to employ Ukrainians and the Ukrainians with the presentation and presentation of this card will have the right to do so, ie to be employed as employed Community and Cypriots or nationals of third countries ".

Mr. Nouris also noted that the rights to medical care are provided "without any problems at all" by the competent Ministry of Health, while on the issue of education, which he described as very serious, he said that a special regulation is needed regarding the possibilities schools to receive specific numbers. "It is something that has been undertaken by the competent Ministry and all the necessary arrangements will be made so that in case of expression of interest, children under the age of 18 can be enrolled, which is our obligation, in the various schools," he said.

Asked if there is a timetable for the implementation of these decisions, Mr. Nouris replied that the timetable is running from this moment. "The decision of the meeting is that absolutely no Ukrainian who is currently in Cyprus and needs help will even wait for next week's decision of the Council of Ministers for formalization," he said.

"For those people who may be displaced and today have either a need for housing, or a need for food, or any other assistance, this will be provided exceptionally. "And of course from the moment the registration of people in the system that I have announced proceeds, then we will know the physiognomy of the flows", he said.

In this way, he added, "it means that we will know who are single, who are families, how many children, how many men and women." "And of course the specific decisions will be taken by analogy", he added, concluding that "it is necessary to know exactly the physiognomy of these people who are in our country today. We do not know her at this time. We will know her in the next few hours ".