Forest Department: We have followed the Act for hiring aerial firefighting helicopters 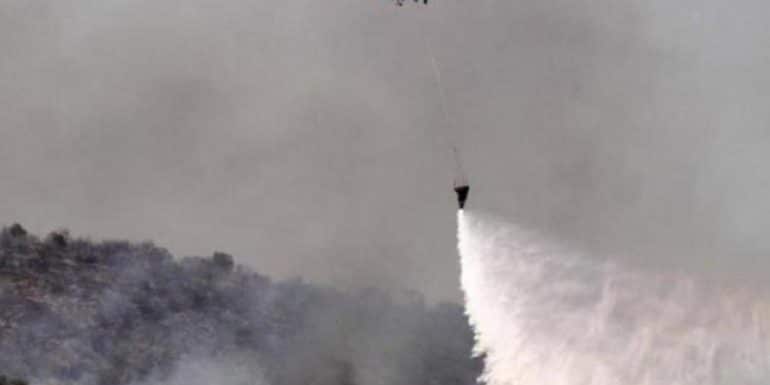 The Law followed for the rental of two aerial firefighting helicopters, says the Department of Forests, commenting on "Politis" newspaper reports on the matter.

Following the law and the Public Contracts Regulations and the statutory procedures, the Forestry Department made an extraordinary effort which is confirmed by the fact that it took only eight months, to hire two helicopters for aerial firefighting for the years 2022 and 2023 with the right to renew for year 2024 and the year 2025, he said in a statement.

On the occasion of the publications of the "Politis" newspaper on the subject, the Forestry Department reports that the Tender documents were prepared in December 2021 and sent to the Public Contracts Authority for approval on December 28, 2021.

The first relevant tender was announced on 25/1/2022, which was canceled because the only company that submitted an offer did not meet the conditions for participation.

The second tender was announced on 15/3/2022, which was again canceled since the only company that submitted an offer, which was the same that took part in the first Tender, did not meet the conditions for participation.

The announcement of the third Tender (TD 48/2022) was made on 29/4/2022, with the negotiation process and 26 entities showed interest, 7 participated while two were deemed to have fulfilled the technical part.

The publication states ""P" became aware of the content of the report (of the member of the Committee who refused to put his signature).... awaiting the actions of the Attorney General, the Auditor General and the Minister. Georgia".

The publication states that "the Coordinator of the Committee" was "trying to convince the other members" (who are his subordinates) apparently implying that as his subordinates he could impose himself on them and do whatever he wanted.

"Someone has documented that there is an incorrect reference to the Coordinator of the Commission. Furthermore, for only one of the members of the Committee is Mr. Kotziikas his immediate superior. Mr. Kostas Skordis, who belongs to the Aviation Means Unit, does not have a direct supervisor, Mr. Kotziikas. Not only that, the Committee could have had three members, but it was chosen to be five members in order to have the participation of more specialties and also experts from other Services in order to have transparency", it is added.

The report, continues the announcement of the Department of Forestry, that the remaining members of the Committee are subordinates of the Coordinator is indisputably a distortion of the truth.

"When even the composition of the Commission was distorted, a matter that is normally not amenable to a different interpretation, doubts can reasonably be raised about the correctness of the content of the publications, especially in technical matters", it is noted.

Among other things, the Department of Forestry recalls that in an earlier publication of "P", the Order of the Court for the disclosure of documents presented it as a Judgment of the Court of conviction of Rossavia, the company that owns the helicopters.

He points out that the dissenting member had every right to disagree. "The Commission consisted of five members, it made its decision by recording the opinions of the disputant. Written answers were given by Mr. Kotziika point by point. So the question arises why the publication did not contradict the answers given. Isn't that what ethics dictated? Not even a mention was made that answers were given. Answers to all questions will be given later when answers are given to the issues raised in the publications", it is added.

The Department of Forestry states that in order to have complete transparency and "to end the privileged possession of information by the "Citizen" and to prevent issues from being presented as they see fit", the entire correspondence between Mr. .I sat down and disagreed so that the experts who are able to understand things better can form their own opinion.

Additionally, the Forestry Department says it had no insistence on Russian helicopters. "Since open tenders were held, each economic operator could submit his proposal with the helicopters he wanted. An open tender is 'open' to any proposal for it and is called open," it added.

In our effort to carry out our mission to deal with forest fires, serving the national interest and doing our duty and with a high sense of responsibility, says the Forestry Department, it was our position in collaboration with our Ministry, in the event that it is not possible to meet the need otherwise to make every effort and exhaust every possibility at the political level to derogate from the ban on companies and helicopters of Russian interests.

"We had two unsuccessful Tenders, while in the third there were two financial entities that fulfilled the technical part, in fact one of the two did not have Russian helicopters, but for the years 2022 and 2023 it was more expensive by €818.000. Based on the award criterion specified in the Tender, which was the lowest price, it was awarded to the tenderer with the lowest price," it is pointed out.

The paper says "the two KAMOV-32s were leased from the Forestry Department and will cost us almost €2025m by 17,5 despite there being much cheaper options within the specifications set".

The Forestry Department on this matter states that the price offered was the result of three Tenders and that this was the market price. There are several factors that determined the price.

"The price offered is 35% lower than the price offered by a company that expressed its interest to the European Commission to offer its services and indeed with helicopters that carry 2500 liters instead of 4000 liters carried by the helicopters leased by KD. It is not the Forestry Department that made the decisions. The Department of Forestry made recommendations which were approved by the competent bodies, namely the Ministry of Finance and the Tenders Council of the Ministry of Agriculture, Rural Development and Environment", it is added.

The Forestry Department says that the European Aviation Safety Agency (EASA) has not banned Kamov 32 helicopters from flying in the EU. The ban refers to the type certificate and is not related to licenses to fly Kamov 32 helicopters and even includes specific models of the manufacturer KAMOV 32 which does not include the type of helicopters leased by KD.

Regarding the helicopter insurance certificate that has been filed, the Forestry Department states that it also includes the area of ​​Cyprus as a general area of ​​activities, which subsequently, with the modification of the Air Carrier's license and the addition of aerial firefighting in Cyprus, confirmed full compliance with the conditions. Helicopter insurance is under the UK-based Lloyds reinsurers, a company with extensive experience and expertise in aviation insurance (Aviation Insurance).

"Aerial firefighting operations in Cyprus are carried out on behalf of State Services and as such the helicopters are considered state-owned and do not fall under the control of the Department of Civil Aviation," it added.