Vasilios: "Quicksand" the vote of the Synods and the scenarios (VIDEO)

"The people have as a criterion which Bishop they want the Church of Cyprus to have. This will also determine the options of the Synod later" 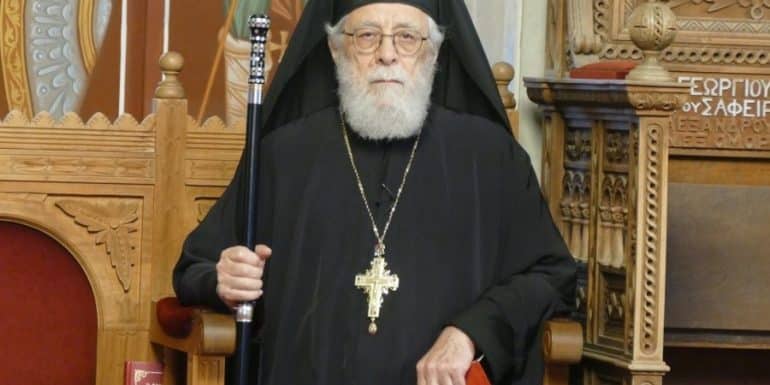 Metropolitan Basilios of Constantia characterized the decision of the Holy Synod not to allow foreign Orthodox living in Cyprus to vote in the upcoming archdiocesan elections as an emergency measure.

"If the provision remained, we would be led to a postponement of the electoral process and this would not benefit the Church because there would be an election campaign during the holidays, which is not appropriate to disturb the world spiritually", he said, noting that a second reason is not to have more contact with the Presidential Elections.

Speaking on the Sigma Mesimeri and Kati Broadcast, His Holiness said that the new Archbishop must have the confidence of the Holy Synod but the agreements between the hierarchs will depend on who will enter the Triune.

The selection criteria, as he noted, are not only ecclesiastical but also a matter of the geostrategic and geopolitical situations that prevail in the region and these will have a greater impact on the Archbishop Elections. I imagine the same will happen in the Presidential elections.

"The people have as a criterion which Bishop they want the Church of Cyprus to have. This will also determine the options of the Synod later", he said while in the same context he characterized the vote of the Synod members as "quick sand" "given that the scenarios may be very different from what we expect". He even pointed out that no agreements have been made so far and what is heard are estimates.

He characterized the effort to bring young people back to the Church as the most difficult task while saying that the Church is not against technological progress.

On the subject of homosexuality and abortion he said “This subject is constantly raised and I don't understand why. Have you ever seen me when I go to Church try to excommunicate someone for their sexual orientation or deny them the right to Holy Communion? We never will. However, looking for an issue that starts from European lobbies and every time there is an issue that they want to obtain an identity through certain actions, this is not entirely correct on their part because there are Archbishopric Elections that they want us to give them their identity . Let them acquire their identity with the law of the state and society because the Church has a different identity".

Regarding abortions, he said: "During the invasion, in Cyprus it was prohibited by law and the Synod of the Church decided to give freedom to those women who had been raped and remained fertile to have an abortion or keep the child. Then the State followed and decriminalized abortion. When the Church accepts such challenges, it has the possibility to decide the letter of the Gospel law or to apply the philanthropy".

Regarding the Cypriot issue, he said that at this point a way out of the deadlock should be sought, while he also commented on the reactions of the Turks to the participation and consecration of a shooting range in the Free Province of Famagusta.