VIDEO: They didn't let T/k in Turkey "celebrate" with the false flag

Thousands of swimmers participated in the Bosphorus Intercontinental Race 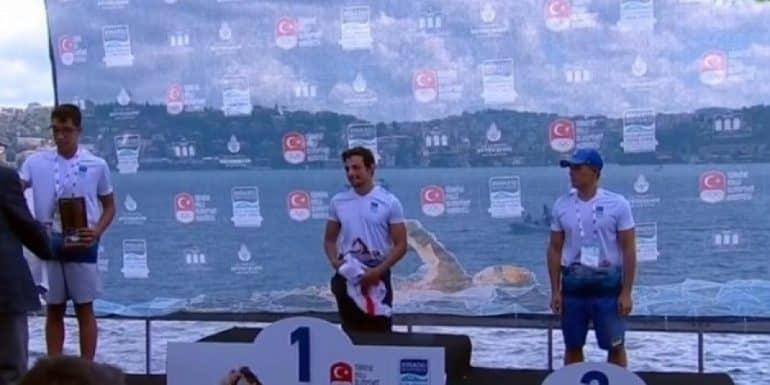 Turkish Cypriot swimmer Doğukan Ulaç took first place in the Bosphorus Intercontinental Race. When the athlete went up to the podium for the award, he held the fake flag in his hand in order to "celebrate" with it.

However, the decision-makers asked him to take it down and he put it in his pocket, saying afterwards that they indicated to him that "politics should not be involved with sports because of the war in Ukraine".

Thousands of swimmers participated in the Bosphorus Intercontinental Race

More than 2.400 swimmers from around the world took part in the 34th edition of the Bosphorus Intercontinental Swimming Race in Turkey, a unique race between Asia and Europe. It is an annual open sea race and is the only official swimming race in the world that crosses two continents.

For the 34th edition of the race, 2441 swimmers, including 1198 foreign swimmers, gathered at the pier in Kuruçeşme Cemil Topuzlu Park and were transported by 3 boats to Kanlıca Ferry Pier, where the race started.

The first event was held in 1989. The race starts from the Kanlica neighborhood on the Asian side of Istanbul and ends at Kurucesme Cemil Topuzlu Park on the European side, a distance of 6,5 kilometers on the iconic Bosphorus Strait.