Min. Health: The mask does not come off - The return of students with a rapid test is being considered

On August 30, the final roadmap for managing the pandemic will be presented 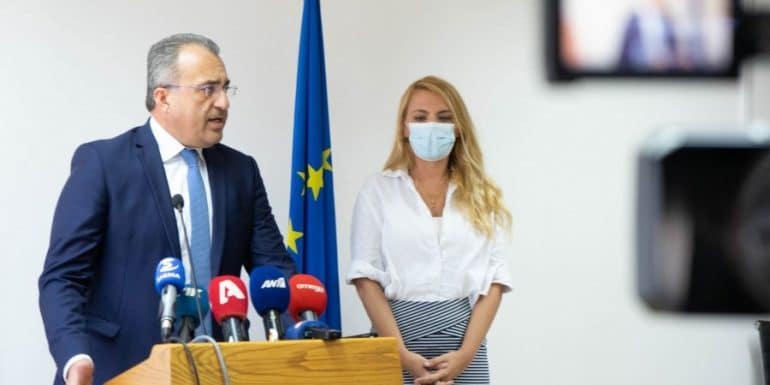 On August 30, the final roadmap for the management of the pandemic will be presented, said the Minister of Health, Michalis Hatzipantela, adding that scientists are in favor of the use of masks and that the return to schools of students and teachers with a 48-hour rapid test is being considered. The statements of the Minister of Health were made after the end of the meeting in which he sat with the members of the Scientific Advisory Committee (SEC), on Friday at the Ministry of Health.

Initially, the Minister clarified that the road map presented at the meeting is not the final one, but a draft. He added that in the next seven days, everyone will give some suggestions to the Ministry of Health so that the final road map can be presented on August 30, before the next session of the Council of Ministers.

Asked about what the road map under preparation includes, Mr. Hatzipantela pointed out that the meeting discussed what will be done with the opening of schools, because it is something that interests the world, as well as the epidemiological surveillance system, because in the last months controls are very few. "According to the scientists, we may have a new wave in the winter, so we must be ready for all eventualities," he stressed. Another issue that was discussed at length and will be discussed again next week, the Minister of Health said, is long Covid patients. In addition, he said that the Medical Services of the Ministry of Health will analyze the reasons why some patients are hospitalized. "For example, if a patient does not take the antiviral drugs we have on time, there will be more information to the personal doctors so that we can prevent some hospitalizations," he explained.

Answering a question whether vaccination is included in the road map, the Minister of Health stated that he was informed by the European Commissioner, Stella Kyriakidou, that within 2-3 weeks news is expected regarding vaccines, which will protect against the new mutations and the procedures that will be followed.

Regarding the implementation of rapid tests, Mr. Hatzipantela stated that the proposal that has been submitted is to conduct a 48-hour rapid test for all students before they go to school and depending on the results of this rapid test, decisions will be made on what done in the future. He added that this proposal will be studied again next week, because in the last 15 days the numbers of positive cases have been on a downward trend and expressed the hope that this will remain the case for the next 10 days.

Regarding the rapid test for teachers, the Minister said that the proposal also concerns teachers, "but we are trying - before taking this proposal to the Council of Ministers - to find ways to implement this decision".

Responding to the mandatory use of a mask, Mr Hadzipandelas explained that "scientists have a strong opinion that the mask protects and at the moment we cannot remove it". He clarified that the use of a mask concerns children over 12 years old, that is, what is valid in the community at the moment.

Asked if he was worried about a possible spike in cases due to August 15, the Minister of Health said that the coronavirus "is unpredictable, but we are here, we have a program and a plan to manage it as we have managed it exceptionally recently. We are satisfied and the positivity numbers are low for the last XNUMX days."

Zoi-Dorothea Pana, representing the Advisory Scientific Committee, thanked the Minister of Health and his team, as they listen to her concerns, recommendations and opinions.

At the same time, he warmly congratulated the work done by the Ministry of Health in relation to the road map, which, as he stated, "is a framework, it is the pillars, it is the tools, which will highlight the existing work and strengthen the future work, making use of what we have at hand in every phase of the pandemic".

He added that "today there was a very constructive fermentation and the Minister will give us the opportunity to provide and give further recommendations, in relation to the final design structure". This, he added, is the general framework, which "is fully in line with the recommendations given by the European Commission and also by the European Organization for Disease Control and Prevention".

Asked about the noticeable reduction in cases and the stable course of hospitalizations, Mrs. Pana stated that the biggest lesson after more than two years of the pandemic, is "to be careful and not be driven by either panic or complacency, and this also concerns our indicators in hospitals". He also added that the good picture gives an optimism for the autumn as well, indicating that we should focus on preparedness, individual responsibility and the knowledge and experience we have gained in order to achieve the balance in autumn and winter.

Furthermore, Mrs. Pana mentioned that the hospitals now have the experience, the protocols, the drugs and the tools, so that there is management in relation to the patients who are more seriously ill. Finally, he emphasized that the Minister's initiative to increase beds is very important in order to ensure availability.