Zeta Emiliadou - Regulator of the pension is the Minimum Salary 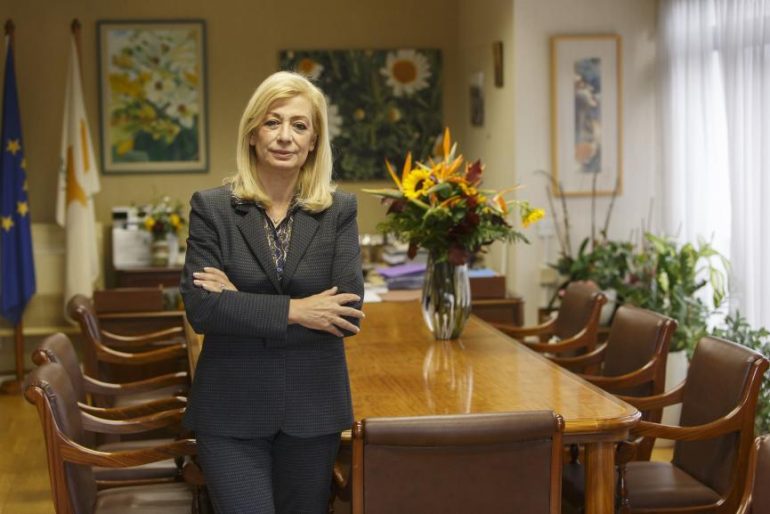 What message does Zeta Aimilianidou send "to everyone" for the 13th salary in view of the holidays and why the introduction of a Minimum Wage is a "precondition" for the pension reform to proceed.

Read also how the Minister of Labor answers the question whether the restructuring of the employment framework of workers from third countries is related to the immigration problem that plagues our country.

Establishing a Minimum Wage, Pension Reform, Work Framework for Third Countries, Teleworking and other topics in the interview that follows.

The debate on the introduction of a National Minimum Wage is on the table of social dialogue. If we can not say what the height of the ECM will be, can we know what its calculation mechanism will be, even in rough lines?

Due to changing financial conditions over time, the minimum wage will need to be adjusted at regular intervals to maintain system efficiency. Therefore, it is important to establish a reliable mechanism that will collect and analyze statistics and will play a catalytic role in conducting a structured social dialogue for the formation of the Minimum Wage over time.

According to the studies we have completed, the criteria that need to be taken into account for the determination and adjustment of the Minimum Wage include the variation in living costs, trends in employment levels and unemployment rates, the differentiation in economic growth and productivity as well as other parameters.

These are the general characteristics of the mechanism that we aim to establish, so that the adjustment takes place on a regular basis and in a transparent manner, including the initial determination of the Minimum Wage with the start of implementation of the institution. These issues, however, are on the social dialogue table for consultation with the social partners before any final decisions are made.

You often refer to the fact that according to the reports and research that have been done, there will only be benefits from the establishment of the ESM. Where do you support this position? Are there any specifics?

This position is based on the results of the studies that have been done and which have examined all the application parameters in the database and the performance of general statistical analyzes to examine the effectiveness of the operation of the minimum wage in Cyprus. For this purpose, specialized quantitative analyzes and assessment of the effects of the implementation of the institution of the Minimum Wage on the labor market and other aspects of the economy were carried out, as well as on the examination of Cyprus' compliance with ILO conventions on the minimum wage. The results of the studies were cross-referenced and confirmed with the support of the European Commission and with the participation of the ILO and technocrats from 9 Member States of the European Union with similar labor relations systems.

The main goals are to achieve a decent standard of living and to improve the protection of workers from unjustifiably low wages. At the same time, however, based on the results of the studies, other important goals are achieved, such as reducing wage and income inequality and the level of poverty for workers, protecting groups of workers with low bargaining power, reducing the pay gap between the sexes, providing mobility workers to increase productivity but also to contribute to the correction of existing labor market distortions, such as wage reporting.

In which sectors will the National Minimum Wage be applied? How many employees will benefit from this arrangement and to what extent do you estimate that their salary will increase? 4. According to ILO data in many countries, there are occupations that are excluded from the National Minimum Wage. Will something similar apply in Cyprus? And for which professions?

These issues are the subject of the Social Dialogue that is taking place. In any case, the Minimum Wage that will be decided will be the minimum wage for each employee while the provisions of the Law on Protection of Wages continue to apply, according to which no existing salary can be reduced unilaterally by the employer. The provisions of the Collective Agreements also apply and with the implementation of the Minimum Wage, where a higher salary is provided in Collective Agreements, the highest salary is still valid.

What will happen to the professions covered by the current Ministerial Decree? Will they also be included in the minimum wage or will the Decree continue to have the force it has now?

The minimum wage that will be determined will cover these cases as well, unless in the context of the Social Dialogue it is agreed with the Social Partners to exclude any profession or category of employees.

In cases where recruitment is made in the private sector through individual (or collective) contracts, will it be the employer's obligation to apply the ECM or can it invoke a bilateral agreement (employer and employee) which derogates from the provisions of the ECM?

The National Minimum Wage is the minimum wage that can be given to any employee in the Republic of Cyprus. The implementation of this institution, however, does not in any way affect existing or future collective or business agreements that set higher starting salaries. In such cases the highest initial salary provided by the applicable collective or business agreement should be given. Contracts setting wages below the Minimum Wage will not be legal.

The legislative regulation of telework is done with a "guide" the relevant Greek legislative work. Have any additions or subtractions been made to the Cypriot case? And if so, which ones?

In any case, the legislation we are working on is formulated in the data of the Cypriot system of labor relations and labor law and will be discussed at the table of social dialogue with the Social Partners before it takes its final form.

Have you asked employers for information on which sectors are understaffed and specific numbers of shortages? Does the Ministry of Labor have relevant data or will you act on what the employers' organizations will tell you?

The Ministry of Labor, Welfare and Social Insurance has a fairly good knowledge of the needs of the labor market, both through daily contact with the employers themselves through the Public Employment Service of the Ministry, and through the studies carried out on behalf of the Ministry by the Development Authority. Human Resources for the needs in human resources for the next period and the following years.

Therefore, the situation in the labor market is constantly and systematically monitored and it is on the basis of these data and this monitoring that in recent years, either subsidized employment plans or training plans for employees and the unemployed have been announced with remarkable success.

However, the views of employers' organizations on where there are or are expected to be shortages are important as this means a real social dialogue where all views are taken into account before making important decisions.

The unions believe that the employer is seeking to hire workers from third countries in order to reduce their wage costs. There is a view that this phenomenon, in a chain, will act as a lever of pressure for the restructuring of the salaries of the existing workers (local and community). How do you comment on these concerns?

According to the current Employment Strategy for Foreigners, any recruitment of workers from third countries is approved only on the condition that the salaries provided are at the same level as the Cypriot or Community workers in the same company or in the same sector or based on its provisions. collective agreement if there is already a collective agreement in the field. This ensures that salaries are not undermined. In addition, for the approval of permits for employment of foreigners, employers have the obligation to first hire any unemployed and available for work Cypriot or community person, so these permits are given sparingly and after the margins of employment are exhausted.

Do you think that the formulation of a strategy for the employment of workers from third countries can be linked to the management of the immigration problem that our country is facing? That is, immigrants and refugees to enter the labor market through the emerging employment strategy?

The employment of foreign students or asylum seekers has always been allowed under certain conditions set out in the Legislation and the Decrees issued from time to time on the basis of the Legislation. This issue is one of the many aspects of the emerging foreign employment strategy being discussed with the social partners, but it is not related to the management of the immigration problem, which is a completely different issue.

How is the planning for the pension reform going? Will the studies for the overall system review be ready by the end of the year?

This issue is being discussed in the Labor Advisory Board with the social partners and in this context priority has been given to completing the discussion on the National Minimum Wage by the end of this year, as the studies on the minimum wage have been completed. It is important to note that the existence of a National Minimum Wage decisively and directly affects the plans for the pension system, as it affects the minimum amount of contributions to the fund for employees, employers and the self-employed and consequently the amount of pensions. of these persons.

Based on these data, the studies related to the reform of the pension system will be completed within 2022.

The agreement for ATA expires at the end of 2021. On the one hand, the employers' organizations demand its complete abolition, on the other hand, the Trade Unions, due to their accuracy and inflation, demand its full implementation for all employees. What do you say?

This is also one of the issues on the agenda of the Labor Advisory Board and will be discussed with the social partners.

We are going through a period where the employees are traditionally given the 13th salary. What is your message to employers and employees?

Let me emphasize to everyone that based on the Wage Protection Legislation, the obligation of the employer to pay the 13th salary is given in cases where the 13th salary is paid either on the basis of the employment contract or on the basis of custom, that is because it is customary. The Department of Labor Relations of the Ministry and the Unified Inspection Service are always at the disposal of each employee to investigate cases where labor law may be violated and to take appropriate measures when this is found.

It is noted that this year, as in recent years, the Ministry of Labor, Welfare and Social Insurance is conducting during December an information campaign on the obligation to pay the 13th salary, with information material through radio spots and on social media but also actions to inform both employees of their rights and of employers about their obligations.