A small step for Lego, a huge step for women 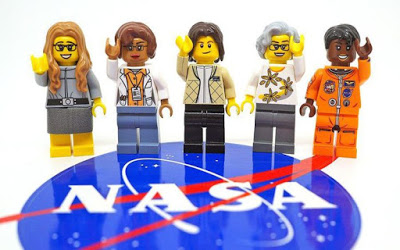 A small step for Lego, a big step for women in science: the Danish company is preparing to launch new figures, the "NASA women", models of heroines who left their mark on the history of the American space agency.

The idea to honor NASA scientists and astronauts was suggested to the toy giant by Maya Weinstock, an MIT News journalist.

"Women have played a crucial role throughout the history of the US space program. "Nevertheless, their contribution remains unknown or underestimated," wrote Winstock in her proposal to the company, which has garnered the support of 10.000 people, the threshold required for Lego to consider it.

The figures that are expected to be released in 2018 are five. These are dummies:

- Sally Reid, the first American woman to go into space in 1983; - May Jamieson, the first African-American astronaut to go into space in 1992;

- astronomer Nancy Grace Roman, also known as "Hubble's mother" for her role in the development of the famous telescope. - computer scientist Margaret Hamilton, who developed the Apollo mission navigation systems in the 1960s and 1970s; - and the mathematician Kathryn Johnson, who calculated the orbit of Apollo 11 on its flight to the Moon. Kathryn Johnson is also among the three African-American women whose story ended up on the big screen with the film Amazing Women, which was nominated for an Oscar.