It is noted that this resolution was tabled by the Democratic Alarm. 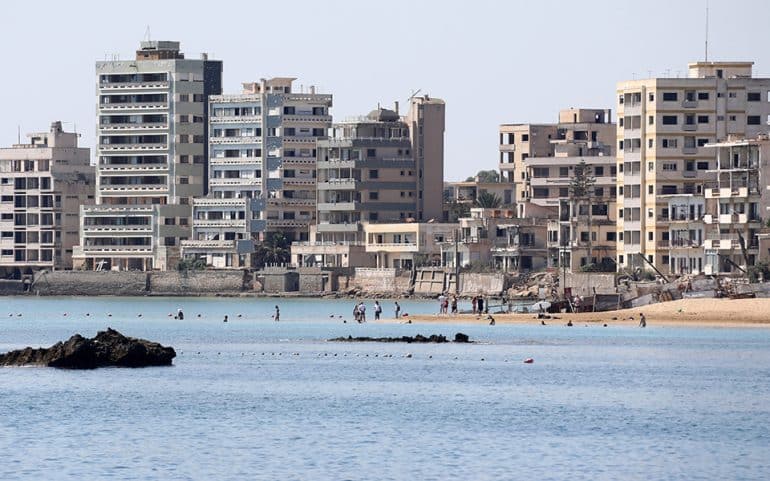 Exclusive photo released today and depicts the view of the coastal front of the enclosed city of Famagusta from the sea for the first time in 45 years. Friday, August 30, 2019. ΑΠΕ- ΜΠΕ / ΚΥΠΕ / ΚΑΤΙΑ ΧΡΙΣΤΟΔΟΥΛΟΥ

The condemnation resolution of the European People's Party regarding the illegal actions of Turkey in Famagusta and the negative developments in the Cyprus issue was approved.

It is noted that this resolution was tabled by the Democratic Alarm.

The resolution as it stands:

The European People's Party (EPP) condemns any violation of international law, as well as any violation of the sovereignty and territorial integrity of any independent state. Therefore, the EPP reaffirms its strong support for the ongoing process for a comprehensive, sustainable and workable solution to the Cyprus problem, based on the relevant resolutions of the United Nations Security Council, European law and European principles and values, a solution without occupying troops, anachronistic guarantee systems or any other kind of dependence on third countries. The EPP reiterates that the status of Cyprus as a member state of the European Union is the best possible guarantee of security, stability and prosperity of Cyprus and all Cypriots.

The EPP expresses its strong concern after the negative developments in the Cyprus problem. The EPP will never accept the dichotomous position of Turkey and the Turkish Cypriot leadership for the creation of two separate states in Cyprus, which is contrary to international law and is a clear deviation from the agreed framework of negotiations for the solution of the Cyprus problem on the basis of Dizoniki. Bicommunal Federation, as defined by the relevant resolutions of the United Nations Security Council. The EPP explicitly denounces any alleged alternative aimed at creating two states in Cyprus.

The EPP welcomes the position of the President of the Republic of Cyprus, Mr. Nikos Anastasiadis, on the need to resume negotiations on the basis of the United Nations framework, a call which was repeated during his speech at the 76th General Assembly of the United Nations. Therefore, the EPP welcomes and supports the proposal for "Confidence Building Measures", which the Republic of Cyprus has recently promoted, in order to remove the impasse but also the differences between the two communities and to create the necessary climate for the resumption of negotiations. The EPP calls on Turkey to take all necessary and constructive measures to actively support the effort and to contribute to the resumption of negotiations between the two communities under the auspices of the United Nations as part of the Secretary-General's mission. of the UN.

The EPP condemns the decision of Turkey and the Turkish Cypriot leadership to open part of the besieged city of Varos on July 20, 2021. Such actions are a clear violation of all relevant UN Security Council resolutions and set an extremely negative precedent which affects the solution of the Cyprus problem. The EPP reiterates that any attempt to colonize any part of Varosia, by individuals other than their legal residents, can not be accepted.

The EPP underlines the importance of the Varosha regime and demands Turkey's full compliance with the relevant UN Security Council resolutions, namely Resolutions 550 (1984) and 789 (1992) as well as the 1979 High Level Agreement reached between of the then President of the Republic of Cyprus and the then Turkish Cypriot leader, and set the framework for the immediate return of the city of Varosia to its rightful inhabitants and the transfer of the administration of the region to the United Nations. The EPP calls for a reversal of the legal actions and events that have taken place in Varos since October 2020, in accordance with the Presidential Declaration of the United Nations Security Council of 23 July 2021 and the declaration of the High Representative of the European Union July 27, 2021.

The EPP emphasizes that the package of "Confidence Building Measures" presented by the Republic of Cyprus, includes, among other things, the return of Varosia to its legal residents under the administration of the United Nations, in exchange for the operation of the customs services of its port. Famagusta under the supervision of the European Union and the operation of the airport of Tympos under the United Nations. The aforementioned port and airport are located in the Turkish-occupied part of Cyprus and their operation will be to the benefit of the progress and prosperity of the Turkish Cypriots. As part of the "Confidence Building Measures", the Republic of Cyprus expects Turkey to fully implement the Ankara Protocol, by opening its ports to Cypriot-flagged ships, and allowing Cypriot aircraft to enter Turkish airspace.

The EPP also condemns any aggressive rhetoric and actions aimed at threatening the sovereignty and sovereign rights of EU Member States. to explore and exploit their natural resources, on the basis of the European acquis and international law, including the United Nations Convention on the Law of the Sea. Specifically, the EPP condemns any illegal and provocative action by Turkey within the Exclusive Economic Zone (EEZ) and the continental shelf of the Republic of Cyprus, as well as the Greek continental shelf, in violation of international law and the Law of the Sea. The EPP calls on Turkey to refrain from any new challenges and unilateral actions that violate international law.

Based on the conclusions of the June 2021 European Council, the European Union should cooperate with Turkey in a gradual, proportionate and reversible manner, subject to strict conditions depending on Turkey's behavior, a position in which the EU remains committed. The EPP calls on Turkey to refrain from actions that are not in line with good neighborly relations, as well as from actions that undermine efforts to resume negotiations and cause instability in the region.