Hliadis, Christofidis and Protopapas – The goal of the independent candidates (vid)

What is the goal of their independent candidacies? 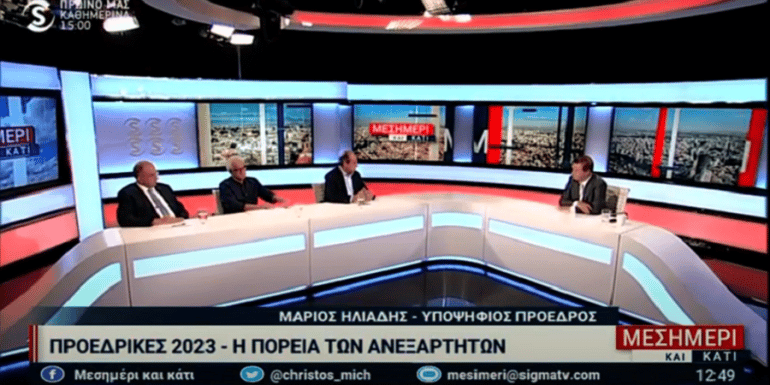 The three candidates for the Presidency of the Republic, Marios Iliadis, Konstantinos Christofidis and Christodoulos Protopapas, who have no political apparatus behind them, were hosted on the show Mesimeri and Kati and were invited to comment on the goal of their independent candidacies.

Mr. Iliadis stated that from the first moment he submitted his candidacy, he accompanied it and characterized it as independent in the sense that it is not a nomination of one or more parties. "I have been a citizen with a presence in public affairs for forty years, I feel that I have participated in public life and that at this time I could file this nomination. A nomination addressed to the whole of Cypriot society, the citizen of this society and the institutions that make up society"

In his turn, Mr. Christofidis mentioned that with his colleagues they have created a new, radical plan for Cyprus and according to him this plan will take Cyprus on some other paths. He noted that the EU should help countries that have serious problems or are in a war zone, for example we should start discussing the reconstruction of Syria. "I am a candidate because we have positions for our country, for our region and for the EU and that must be moved."

For his part, Mr. Protopapas said that his candidacy is based on the fact that Cyprus and Europe are entering a very bad time and the world will see it in the coming months. Very bad months in energy, the impoverishment of all the people of Europe, the world will need its natural survival and not to do something good for itself but to survive. With an increase in rents, with the lack of housing units for students, especially in Limassol, and all of this is the fault of corruption and the wrong economic model we had.

"The reason I am running as a candidate with my team is to give a completely different choice to the voters, who are looking for hope with the determination to fight corruption, to implement a new development model centered on primary production in Cyprus. Also in our candidacy it is proposed to submit a proposal to the UN for the return of the residents of Famagusta and its reconstruction as a smart city which will be able to accommodate everything from the Middle East and Europe".

Watch the entire discussion in the video: