Karoyan: Scenario DISY-DIKO-EDEK-DIPA with a candidate for common acceptance (BINTEO)

Marios Karoyan, among other things, mentioned that there is a scenario of cooperation between DISY-DIKO-EDEK-DIPA with a candidate other than Mr. Averoff 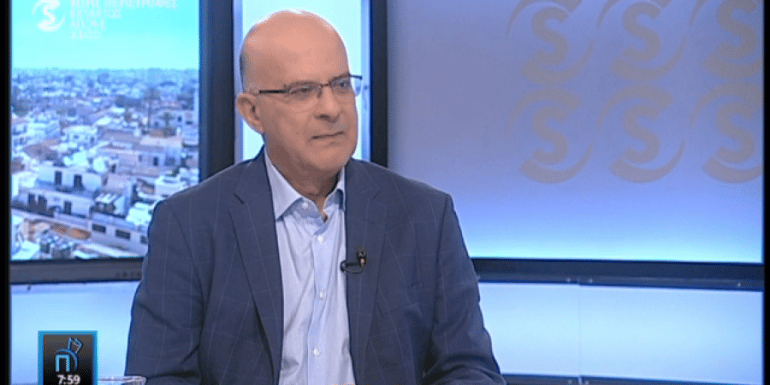 The front page hosted the President of the Democratic Party Marios Karoyan, who spoke about his party's moves in the run-up to the Presidential elections. Marios Karoyan, among other things, mentioned that there is a scenario of cooperation between DISY-DIKO-EDEK-DIPA with a candidate other than Mr. Averoff.

He initially said it was a conscious choice of the party to stay out of the election frenzy. He added that the positive approach to things for DIPA would be a government of national unity or a government of wider acceptance. "It is not a figure of speech but a conscious political choice."

Continuing, he stated that the other political forces do not adopt the proposal of DIPA because there is no will and in addition they consider it impossible. "We will not agree on everything and each party will continue its autonomy," he said.

He added that he lacked political courage and determination. "I have come to the conclusion that we do not love this place. "From this place we took, we take and we can not give due to ideological mentalities".

He noted that there is toxicity and we have not yet got into the essence of the election. "It bothers me that we say we can not find solutions and consensus, while when something bad happens then we realize that we can find solutions." He added that "we are a people of exaggeration and extremes".

Speaking about the moves of DIPA in view of Presidents, he stated that they are in the final stage with the goal of a government of national acceptance. "In the last few days I had discreet contacts with the Presidents of DISY, DIKO, EDEK, while some time ago I had contacts with Mr. Stefanou."

He added that there were two scenarios. "The first scenario for a government of national acceptance was AKEL-DIKO-EDEK-Ecologists and DIPA with a candidate who would not be a party leader or executive."

As for the second scenario, he said that it concerns their current proposal. "Government of national acceptance consisting of DISY-DIKO-EDEK-DIPA with a candidate of" common acceptance "".

He noted that this is not an easy task. "It simply came to our notice then. I will have a sample in the next few days ". He added that if there is no such possibility, then as a party they will expand their circle of contacts.

"So far we have not met with Mr. Christodoulidis. "I will see him after the current process is completed," he said.

As for him, he clarified that he is not interested in being a candidate. "The next president will not be sitting in a presidential chair, but in a powder keg," he said.

He clarified that his proposal to the parties involved is being evaluated and, as they told him, deserves reflection.

Mr. Karoyan then spoke about the economy and the increase in prices for basic commodities, stressing that from September things will be even worse.

Asked to comment on Turkey's stance on the geopolitical game as it unfolds, he said that so far it has emerged victorious and strengthened. "He can play it on two boards with the Cypriot unresolved."